The Equalizer‘s Detective Marcus Dante had put off talking to his sons about how to handle themselves when dealing with the police, for two reasons.

For starters, he wanted to maintain the innocent way the two boys viewed the world. The second reason, though, proved a lot more complicated. Because Dante is a Black man and a Black cop, he struggled to explain the dichotomy between his personhood and his profession. Or, as his ex-wife explained to Robyn on the March 20 installment titled “D.W.B” (aka Driving While Black), “You get judged from the outside, while trying to solve the problem from inside.”

Unfortunately for Dante, this contradiction of sorts came to bear when he stopped for gas in Upstate New York and two officers pulled up and started asking him questions because there had been a robbery in the area. Dante knew his rights and wouldn’t let them unlawfully search his car. Before he could tell them who he was or show his badge, lead officer Deputy Barnes tased Dante and hit him in the head with a collapsible baton, knocking him unconscious.

When the other officer, Deputy Morales, pulled out Dante’s wallet and discovered he was an NYPD detective, the two panicked and Barnes decided they would have to hide Dante and eventually kill him to cover up their mistake. As fans know, Robyn wasn’t going to allow that, and with a lot legwork, she eventually came to his aid. 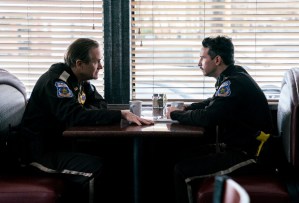 Joseph C. Wilson, one of the CBS drama’s co-executive producers and writers, penned the installment and says Dante’s position as a Black cop created the perfect opportunity to unpack a very difficult narrative.

“The goal was to open up Dante’s character in the shadow of George Floyd’s death and the Caron Nazario case, the Army officer who police pepper-sprayed at a gas station,” Wilson tells TVLine. “All of these things are what we deal with as Black people in America everyday, and I wanted to combine those cases. It allowed us to really show who Dante is, what makes him tick, and the journey that he’s on — but also bring awareness to the fact that this is something that is not over.”

Tory Kittles, who plays Dante on The Equalizer, hopes the special-issue episode will drum up discourse and compassion.

“One of the best things about being an actor is you get to deal with real-life experiences without suffering the consequences,” Kittles observes. “Dante is very complex and we got to dig into that in this episode. Joe called me after last season and said he had an idea. My initial reaction was, ‘There’s no way in hell they’re going to let us do this.’ But after everyone heard Joe’s pitch and said yes, he wrote this incredible, multi-dimensional script, and I was as terrified as I was excited.” 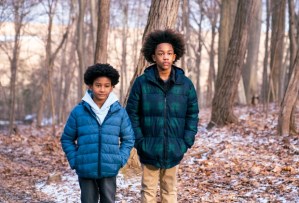 The episode hit close to home for Kittles, who shares that having a Black writer and a Black director (in Solvan Naim) created a safe space for him to perform.

“I knew it was going to hurt because it was very personal to me,” Kittles recalls. “It brought back vivid images from my childhood of my uncle coming home one night battered and bruised after a run-in with the law. He survived it, thankfully, because there are so many cases where our people don’t. But it changed him forever. Hopefully, as we explore more of these stories, we’ll be able to inspire some empathy.” 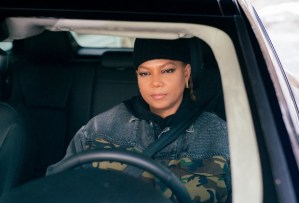 On a lighter note, Dante’s feelings for Queen Latifah’s Robyn also grew after she helped him and his sons, who were stranded inside the gas station when the officers carried Dante away.

In one scene, Dante hallucinated he was dancing with Robyn cheek-to-cheek. So, is it wrong if such a moment made fans want to ‘ship these two even more? Wilson says it’s all part of the show’s bigger picture.

“Being with Robyn is Dante’s happy place,” Wilson surmises. “A place where there is no noise.”

What did you think of Dante’s harrowing Driving While Black experience on The Equalizer? Drop your thoughts in the comments.