Twisty as a scrunchie, Sunday’s Walking Dead returned to the fore a fan favorite who hit the road only a coupla episodes back and started killing off a new group pretty much as fast as it was introduced. And if you keep reading, we’ll go over all the details of the surprise-filled hour.

Female TV Trailblazers: 25+ Characters Who Made a Big Impact on the Small Screen, From Lucy to Buffy and Beyond 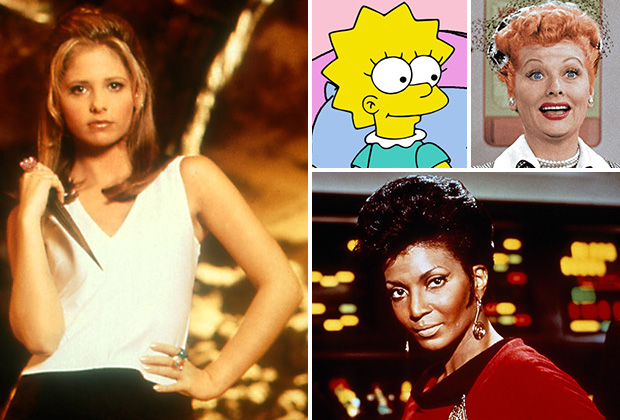 ‘BEING OUTNUMBERED HAS NEVER STOPPED YOU BEFORE’ | As “Warlords” began, a smitten Elijah was just about to escort Lydia from Hilltop to at least the nearest Commonwealth checkpoint when a bloody young man whose name we’d later learn was Jesse rode up to the gate, croaked out something about people being slaughtered and needing help, and promptly died of his gunshot wound. Though the boy had shown up with a map to Hilltop in his hands, we’re not helping anybody, Maggie told Lydia and Elijah. If it turned into a fight — and it certainly seemed like it would — they didn’t have the manpower to do any good. Nonetheless, before the kids struck out on their own, Hilltop’s leader relented. Following Jesse’s map back to the site of the slaughter, Lydia asked Maggie why she refused to accept the Commonwealth’s offer of aid. Because they could get by without it, she replied. Lydia and Elijah were sick of merely getting by. “I just want things to be the same every day,” sighed Lydia. (Same.) Shortly, the trio came upon a handful of troopers, walkerfied after being shot and/or knifed. Then who should come running but Aaron! 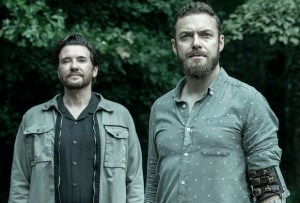 ‘I DON’T WANNA BE ON THE SHELF!’ | From there, we cut to “one week ago,” at which point Gabriel, his faith restored, was recruited by Aaron to help him, as well as boss Carlson and welcome-wagon trainee Jesse, recruit for the Commonwealth a group of 40 religious types holed up in an apartment building. (Got all that?) Once they arrived with their armed guards, Carlson quickly established himself as the cheeriest missionary this side of Book of Mormon. Gabriel and Aaron, on the other hand, were significantly less psyched about the task at hand. The apartment building looked like a fort, and 40 people was… a lot. “Yeah, I’m not doing this,” said Gabriel. That building “practically screams, ‘Do not disturb.’” Unfortunately for him and Aaron, it wasn’t up for discussion. Upon being stripped of their weapons and ushered past the deadest of dead-bolted doors, Aaron, Gabriel, Carlson and Jesse were taken to the office of the group’s leader, Ian (The Terminator’s Michael Biehn), who pegged them as wolves in sheep’s clothing and intended to add their heads to his trophy case full of skulls. While Carlson appeared to soil his trousers, Gabriel and Aaron finally managed to convince Ian that they weren’t cannibals and agree to let them go. Only then — plot twist! — Carlson leapt into action, disarming and shooting Ian and a guard. “What did you do?!?” asked Gabriel. “My job,” Carlson replied. Gulp. 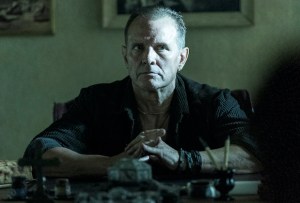 ‘I NEED A SURGICAL SOLUTION’ | At that point, we cut to “one week (and one hour) ago,” and Lance pressuring “retired” CIA assassin Carlson to help him out of a bind. Pamela’s right-hand man had secretly allocated resources to “that other thing” (hmm… ), and the convoy had been hijacked by Ian’s people. Though Carlson was reluctant — and hostile — he agreed. What would he do, though, when Aaron and Gabriel realized they weren’t on a recruiting mission? “They’ll fall in line,” Lance was sure. “Everyone does.” From there, we jumped to Carlson questioning Ian about the stolen guns and cargo. Ian insisted that they’d found the caravan already ransacked, but Carlson didn’t buy it, so he fatally shot him. Presumably having gone through two pairs of pants by this time, Jesse tried to escape on horseback but was shot in the back by a trooper, who would have fired again had Aaron not used his mace arm on him. At that point, Carlson and Aaron were about to throw down when some troopers started firing at the latter, ironically giving him an opportunity to run for it. (How bad was their aim?) 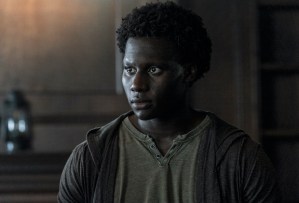 ‘KILL ANYONE WHO WON’T TALK’ | Next, we rejoined Aaron as he filled in Maggie, Elijah and Lydia on what had gone down. Maggie thought that Aaron had given Jesse the map to Hilltop, but if he hadn’t… who had? The answer was revealed “12 hours ago, during the attack.” In this cutaway, we discovered that Negan, dressed like Ian’s people, had happened upon Jesse pre-shooting, given him the map and told him, off intel from a female member of Team Ian, to inform Maggie that Gabriel and Aaron were in trouble. (How the troopers wouldn’t have seen Negan and the woman when they opened fire on Jesse, I dunno. Have I screwed up the timeline?) Stealing back into the building with Negan, the woman slit a trooper’s throat, and the Saviors’ former boss man freed “Gabe.” They wanted to save Aaron from his face-off with Carlson, but as more troopers were coming, they had to get while the getting was good. Finally, “now,” Carlson started pushing people off the roof and ordered a room-to-room search of the building. Holed up with some other members of Team Ian, the woman whose name we were never told gave the group a pep talk, arguing that they’d fight like a family. (Just me, or were there sparks between her and Negan?) They’d have help, too, because even as Carlson was barking his orders, Maggie, Elijah, Lydia and Aaron were already taking out troopers.

So, what did you think of “Warlords”? Wasn’t it a little soon after the Reapers for another religious group? Thumbs up or down on the villainous Lance/Carlson tag team? Hit the comments with your thoughts.