It’s one thing to know that Charlotte lost Sidney to Eliza Campion on Sanditon, but it’s something altogether different to discover that death would soon steal him away forever.

Fans learned that the brooding and handsome hero succumbed to Yellow fever three months after marrying for money when Season 2 of the Masterpiece on PBS series premiered on Sunday. (So, this is how the show chose to deal with star Theo James’ departure.) The installment opened with the juxtaposition between Charlotte dancing and laughing with her friends and family at a party in her hometown, and Sidney’s cold and impersonal funeral in Antigua.

Mary traveled from Sanditon to tell Charlotte the bad news, and Charlotte sobbed in the loving wife and mother’s arms while the following scene showed Sidney’s coffin being lowered into the ground as servants disposed of his bloody sheets. By episode’s end, Tom, Mary and Arthur learned that Sidney was in Antigua to handle some business for Georgiana, but what the matter was is not yet known.

The episode then jumped ahead to three months after Sidney’s burial and centered on an ever defiant Georgiana relishing in her rejection of various suitors’ marriage proposals. For instance, she told a sour-faced man named Lord Kingsley that she’d sooner be boiled alive than marry him, and she later stole his carriage for a joy ride with Charlotte’s younger sister Alison. (More on that in a bit.) 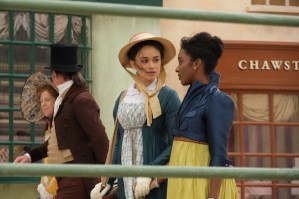 Tom and Mary chastised Georgiana for her lack of tact when turning down a now-offended Lord Kingsley. However, she asserted that candor is a virtue and her new co-guardians, siblings Miss and Mr. Hankins, agreed. Georgiana also added that Kingsley was little more than a fortune hunter who deserved every rude word and slight. Tom would later confess to Mary that he was ill-suited to be Georgiana’s guardian because she refused to heed his counsel.

In the hopes of making Georgiana more agreeable, Tom and Mary sent for her bestie Charlotte, who brought her sister Alison with her. Charlotte was there to mourn Sidney, move on and possibly find a job, while Alison tagged along in hopes of finding a husband. Alison also hoped to find a spouse for her older sister, despite Charlotte’s adamant protestations.

Such protests would matter little when the Redcoats came to town to celebrate their Waterloo victory from years ago. Georgiana, Alison and Charlotte went to meet some of the British soldiers and quickly made the acquaintance of a muscular, shirtless and agreeable Colonel Francis Lennox, who wasted no time setting his sights on Charlotte. 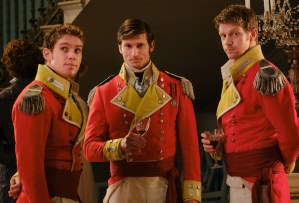 Captains William Carter and Declan Fraser, meanwhile, both became smitten with Alison. Days later, when Georgiana and Alison’s aforementioned joyride ended terribly, it was William who ran to Alison’s rescue and won her over in turn.

Charlotte would also prove herself heroic when she saved a little girl dressed in boy’s clothing named Leonora, aka Leo, from a spooked horse’s wayward hooves during the town’s revelrous military parade. An impressed Francis checked in on Charlotte to make sure she and the child were OK, but Charlotte wasn’t interested in his charms, which made him like her more.

She was more interested in becoming a governess for Leo and her older, surlier cousin, Augusta, which meant meeting Augusta’s father and Leo’s uncle, Alexander Colbourne. Unfortunately, the job interview went sideways when Alexander made a chauvinistic comment about girls not needing to be learned, just amiable. 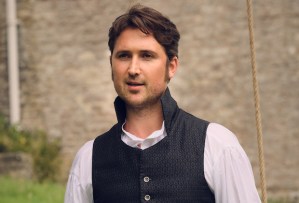 An offended and annoyed Charlotte left as quickly as she could, but the impressed Alexander chased her down on horseback and offered her the job.

Elsewhere in the episode, a pompous and bohemian artist named Charles Lockhart flirted with Georgiana; Georgiana staged a sugar boycott in an attempt to completely abolish slavery; sassy Lady Denham obstinately consumed all the sugar she could; and her niece, Lady Esther Babington, dealt with the unceremonious reappearance of her stepbrother Edward and her own heartbreaking fertility issues.

What did you think of the opening installment of Sanditon Season 2? Grade the premiere in our poll and drop your thoughts in the comments.