Dominique Fishback has played a lot of surly teens on the big and small screen, which is why she almost turned down the chance to work alongside Samuel L. Jackson on The Last Days of Ptolemy Grey.

Then she read the script and realized there was room to make her character Robyn different from all her other portrayals such as Darlene, a sex worker on The Deuce or Billie, an inner city kid in Show Me a Hero, both on HBO. And as viewers of the Apple TV+ limited series (which drops new installments every Friday) can attest, Fishback shines as a knife-wielding orphan who can kill roaches, fight off violent drug addicts and love those in need with her whole heart.

“I try to make sure the teenagers I portray are versatile,” Fishback tells TVLine. “Doing Judas and the Black Messiah allowed me to play a woman and a romantic lead, and all these things. Because of that, I was apprehensive and I wondered if playing Robyn was the thing for me to do. I wanted to show that I could be different. That I wanted to have some fun like in Transformers: Rise of the Beasts. Thankfully, it worked out that I was able to do both.”

It all came back to working with Jackson, whom Fishback describes as a generous scene partner, and creating a Robyn that made sense in Ptolemy’s world. In the latest installment, Robyn became cross with Ptolemy, who has become like an uncle to her, for using an experimental treatment to temporarily cure his dementia despite the harsh side effects. 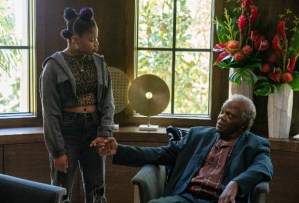 It’s a dynamic that allowed Fishback to peel away Robyn’s tough exterior to reveal the Southern teenager’s nurturing side.

“When I take away the control of what I think I need and I think I want, everything works out,” she explains. “I had to look at the heart of the character and know that God has aligned my steps. He picks my projects. When I try to resist them, and they keep coming back, then I know it’s for a good reason.”

There’s also a cultural component for her.

Are you enjoying The Last Days of Ptolemy Grey and its performances? Drop your thoughts in the comments.