Like a garden full of flowers and weeds, PBS’ Call the Midwife blossomed with a Season 11 debut full of life, death, joy and sadness.

The episode’s most fascinating juxtaposition occurred between Nurse Nancy’s life and that of a mentally unstable woman named Marigold Nyall when the show’s new season began in the spring of 1967. Officially a midwife now, Nancy set out to better her life and play a more present role in her daughter Colette’s world.

At first, Nancy thought about waiting until she could regain custody of little Colette to tell her the truth about being her mom. But when she realized how unhappy Colette was in foster care and at her new school, Nancy, who had been telling Colette she was the girl’s older sister for years, decided to tell her the truth about conceiving her out of wedlock while they gardened together. With this difficult but necessary step, Nancy and Colette literally and figuratively planted new life in the ground, and Colette smiled because she finally realized she was not a motherless child after all.

Marigold Nyall was not as fortunate. The trouble began when Matthew’s workmen found the skeletal remains of an infant in the floor of one the flats in the building he owns and is refurbishing. The police began an investigation and using the newspapers found near the baby’s corpse, surmised that the infant was born in 1936, prior to War World II. 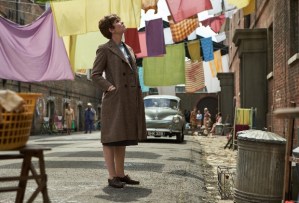 Detective Sergeant Virginia Barrow perused the names of possible residents from that time, and stumbled upon Marigold Nyall and her mother, the latter of whom struggled with dementia. When Sgt. Barrow and Nurse Phyllis Crane came to visit Marigold, she pretended as though her mother had given birth to the babies. (Sadly, a second infant’s body was hidden inside the chimney.)

Nurse Phyllis knew better, however, because she had been treating Marigold’s mother for incontinence and told Sgt. Barrow the elder Nyall had a Cesarean section scar and couldn’t have given birth to those babies without a surgeon’s help. Barrow confronted Marigold armed with those new facts and she finally admitted she’d been having an affair with a married man who had taken advantage of her. 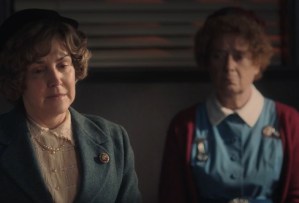 Marigold said the babies were born “silent,” and it was unclear if she was telling the truth or if she and her widowed mother, who were not medically trained, knew what they were doing. In the end, a police psychiatrist deemed Marigold unfit for trial and Dr. Turner and Nurse Phyllis agreed, adding that Marigold had suffered enough.

Matthew and Nurse Trixie planned the babies’ burial and grew ever closer as a result. Theirs was not the only tender moment in the season opener. Audrey and Derek from the Season 10 premiere returned because Audrey was with child again. Afraid her new baby could suffer from the same birth defects as little Christopher did before he died, Audrey cried fearful tears and shared her concerns with Sisters Julienne and Frances and Dr. Turner.

Everyone assured Audrey their unborn child had a fighting chance, but she still fretted and rightfully convinced Derek to stop smoking because she wanted him to live and be a good dad. Making matters scarier, many of Derek’s fellow military servicemen from “Operation Grapple” had fathered babies born without digits and other birth defects similar to that of Christopher. Thankfully, this wasn’t the case for cute little Baby Elizabeth, who was born healthy and happy with all of her fingers and toes.

Sister Frances caught the chickenpox from the Turner children, so Midwife Lucille had to deliver Mrs. Patel’s baby regardless of the language barrier. Using the one phrase of Gujarati she knew, which roughly translated to “all is well,” the newlywed nurse helped bring a beautiful first-generation infant into the Patels’ hope-filled lives. 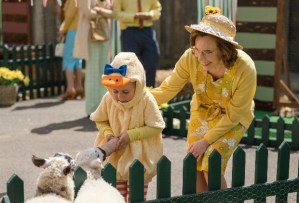 Best of all, Audrey and Derek showed Sister Frances, who had been there for Christopher’s birth and death, their new baby as she smiled at the couple’s fortuitous fortunes from the safe distance of her bedroom window.

What did you think of the Season 11 premiere of Call the Midwife? Grade the opener in our poll and drop your thoughts in the comments.