When 9-1-1 returns for the back half of its fifth season on Monday (Fox, 8/7c), it’ll bring all of your favorites along for the ride — and we do mean all of them.

Maddie (Jennifer Love Hewitt) and Chimney (Kenneth Choi), not seen together since the season began, will finally share the screen on March 28 in what executive producer Kristen Reidel jokingly calls “our one-episode spinoff.”

“They’ve both been through a lot individually,” Reidel tells TVLine of the estranged parents. “Maddie was in a very dark place when she left L.A., and we will see that. The episode in Boston is not just their reunion, it’s what it took to get to that reunion. There will also be some fun in there, because it is St. Patrick’s Day in Boston, which gave us some opportunities for fun amidst the trauma of everything they’ve been through. There are some sweet moments in there, as well. They’ve been apart for six months, and they’ve been through a lot individually, and that changes their relationship going forward.”

But before we reunite with those familiar faces, we have a few new ones with which to get acquainted. Enter Arielle Kebbel (The Vampire Diaries, Midnight Texas) as Lucy, a thrill-seeking firefighter whom showrunner Tim Minear previously described to TVLine as “the female version of Buck.” 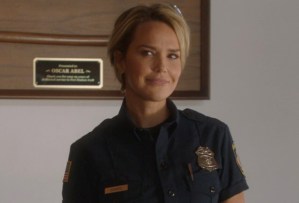 “One of the challenges we had in our little 9-1-1 world is that all of our characters have been through so much, especially at the start of this season with Maddie leaving, Chimney going after her, Buck dealing with that, and Eddie’s ongoing trauma issues,” Reidel says. “It felt nice to have somebody come in who didn’t have baggage yet, a breath of fresh air for lack of a better term. She’s new to this [firehouse] and she sees their world differently because she’s not part of the 118 yet. It just seemed like it was time to get a new person in there who could bring a different dynamic.”

Since Reidel brought up Eddie’s issues, let’s dive into that, too. Though Ryan Guzman’s character chose to step back from the action after getting shot, he’s going to have a difficult time adjusting to life in the slow lane.

“Eddie is very much, and has always been, a person who acts,” Reidel says. “He was with Shannon, she got pregnant and he joined the army. After she left, he became a firefighter. He’s a guy who’s used to doing things and taking action physically. Talking about and acknowledging his feelings has never been part of his DNA. He’s going to have to learn how to do that in the back half of the season.”

Get a first look at 9-1-1‘s spring premiere below, then drop a comment with your hopes for the rest of Season 5.