Halo‘s Pablo Schreiber and The Mandalorian‘s Pedro Pascal have drawn similar lots in life, both playing armored, helmeted badasses on sci-fi series that stream on services with a “+” in their name.

And the actors paths have crossed paths, though not in any way you might have predicted.

In the course of previewing Paramount+’s upcoming series adaptation of the global hit video game franchise (premiering Thursday, March 24), in which he stars as Master Chief, a SPARTAN-II commando, TVLine asked Schreiber if he perhaps sought out Pascal for “helmet acting” tips, from someone who has (ostensibly) much experience conveying emotions from behind a hunk of metal and a visor. 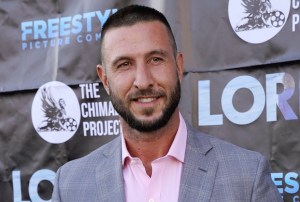 Schreiber, a father of two, laughed at our semi-serious suggestion, then answered, “No — but I did call [Pedro] and ask him for a birthday video for my kid! From one helmeted soldier to another, ‘Can I just get a little birthday shout-out?’ He was very amenable to that, and sent me one immediately.”

(All together now: This is the way… to win over your birthday boy.)

Besides, whereas Mando aka Din Djarin has removed his helmet but a handful of times over the course of two seasons/16 episodes, Master Chief aka John-117 gets to be a bit more liberal in showing his face. And that, Schreiber contends, can only help viewers connect with the enigmatic supersoldier as he approaches a major turning point in his commando life.

“In in this realm of the TV landscape, you really want to have a strong relationship with your protagonist character, and to follow him along you need to have access to the face,” explains the alum of Orange Is the New Black and American Gods. “You need to know how the character is feeling about things over the course of time, and that goes a long way toward forming a bond with your progaontist. [Removing the helmet at times] felt really important.”