Many aspects of Survivor can be deemed hellish, but blindfolded challenges? That’s some brutal stuff right there.

While Wednesday’s immunity challenge left some folks bruised, bothered and bewildered, the real kicker of the episode: The Beware advantage’s secret phrases are back in play. If last season’s twist left you as confused as a goat on AstroTurf or feeling like a bunch of broccoli, well buck up, kiddos! Mike’s got something to tell ya about the game of soccer.

And that’s not all. Another player opted to use her Shot in the Dark this week. Did it wind up saving her? Plus, which tribe had to vote and who went home? Let’s take it from the top in this week’s recap.

IKA | Following last week’s vote-out, Tori’s mentality is shaky. She’s reeling that Zach is gone, and realizes how close she could’ve been to sleeping in a warm bed and eating a hot meal. But when Drea tells Tori and Swati that she wants to stay girl strong and reveals her advantage to them, Swati’s spidey sense is tweaked. Do they just vote out Drea instead? Maybe. And this opportunity seems to get Tori’s head back in the game.

VATI | Jenny and Chanelle find a hermit crab, but these city girls are still getting used to being out in the jungle. While they boil it up, Hai, a vegan, is struggling. He knows he needs to eat to sustain himself, but like Tori, being out in the elements is getting to him. Hai knew when Jeff gave them the no-rice lowdown, he would have to make a decision whether he was going to eat seafood or not. It’s a big moral decision for him, but ultimately, he ends up nibbling on some crab.

Mike, meanwhile, finds what he thinks is the hidden immunity idol… only its that pesky Beware advantage! He wants to “go big or go home,” so he opens that sucker up and gets to reading. At the next immunity challenge, he has to say a secret phrase: “There is such grace in a game of soccer, it makes me cry.” And you know the drill, right? He can’t vote at Tribal until all of the Beware advantages have been found and claimed.

Mike tells his No. 1, Jenny, about his advantage, and he also tells Daniel, who then goes and blabs to Chanelle. The Beware advantage is a liability, she says. But, they could just vote him out… 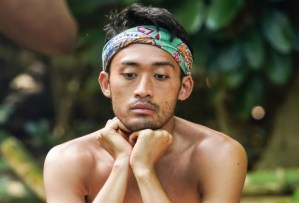 TAKU | Though everyone seems to love her, Maryanne’s sky-high energy is becoming a bit exhausting. If they go to Tribal, it seems like it very well could be a factor into the vote. Elsewhere, Jonathan and Omar seem to be forming a tight bromance, despite the fact that they’re wildly different. Omar is happy using Jonathan as his meat shield, while Jonathan knows Omar is smarter than him. They balance each other out. Marya seems to be the one on the outs, but we learn about her late brother, who was the first nurse to pass away in the U.S. when COVID hit. She hasn’t processed it fully, she says, and she’s on Survivor to seek closure.

IMMUNITY IS NOW UP FOR GRABS | Maryanne’s a bit bummed to see Zach voted out, and admits she was crushin’ hard on the guy (UGH, SHE’S THE BEST). After she gushes a bit, we get down to the nitty gritty. For the challenge, a caller must guide his or her blindfolded tribemates through a course to collect puzzle pieces, then must instruct them on how to complete the puzzle. And they’re playing for reward, too. The first tribe to finish gets a massive set of fishing gear; the second, a smaller set of gear.

It doesn’t take long before everyone is screaming and it’s chaos everywhere! Vati falls behind, but by the time everyone hits the puzzle, it seems to be any tribe’s challenge to win. It’s a real nail-biter, but Vati secures the W. The other immunity goes to Ika, who avoids Tribal Council by a single puzzle piece. Rough stuff for Taku (and Maryanne must be protected at all costs)! 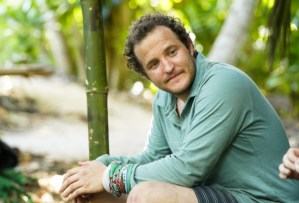 STRATEGY SESH | Jonathan and Omar promise to watch out for each other, as they consider voting out Maryanne (GASP!) or Marya. Omar seems hesitant about keeping Maryanne, but admits her fire is exactly what they need to battle Vati and Ika. The two guys then make promises to everyone, but Marya claims she’s going to bring her Shot in the Dark to Tribal anyway. Meanwhile, Maryanne goes and does what anyone in trouble might do: She idol hunts… only she’s caught red-handed by Lindsay and Marya.

TRIBAL COUNCIL | “This is where death happens,” Probst tells them. (Pretty dramatic, Jeff, but OK.) The host grills them about how they’re going to make a level-headed decision while still keeping the tribe strong. Maryanne says the Shot in the Dark is always in the back of their heads, and then… well, I didn’t quite follow the rest of her spiel. But she’s smiling, and so is Jeff. She goes on a long rant about maybe winning the game and finding love at the same time, and as she goes on, Jeff leans in, having the time of his life. Every though Taku seems to love each other, somebody’s gotta go! It’s time to vote.

Maryanne receives her extra vote at the urn (which she doesn’t use), and when Jeff calls for advantages, Marya pulls out her teeny Shot in the Dark scroll. And she is… NOT SAFE. The votes are revealed, and Marya becomes the third person to exit the game.

Happy Maryanne survived or is she too much for ya? Let us know by dropping a comment below.