There will be no more Good Trouble for Callie and Jamie following Wednesday’s episode, which saw their portrayers Maia Mitchell and Beau Mirchoff exit the Freeform drama.

For Mitchell, who first started playing Callie on The Fosters in 2013 before headlining the spinoff with costar/TV sister Cierra Ramirez, departing the show was “completely a personal decision about my life,” she explains to TVLine in the following video. “I did move to America [from Australia] when I was very young. It has been really hard for me, if I’m being candid, to be away from family. I spent my whole twenties, basically, in another country, [which] I wouldn’t have necessarily done if it wasn’t for my work. I found so much comfort and family in The Fosters cast and crew and then Good Trouble.”

But when the COVID-19 pandemic hit, restricting travel, Mitchell found that being separated from her family and not being able to get to them, if something were to happen, “just became a little too much for me,” the actress explains. Speaking to the producers, “I was just like, ‘I need to be able to be home at the moment.’ When you go through something like that, it just makes things really clear, and I just knew it was time and I had to just prioritize my family and my mental health. It was tough, though. Oh my gosh, it was a really hard decision, and it was a really tough, tough couple of episodes.”

After learning of Mitchell’s decision, showrunner Joanna Johnson — who wrote this week’s emotional installment — set out to craft “a very dignified and a very Fosters/Good Trouble goodbye” for Callie. “I asked her if she would give us a couple of episodes of Season 4 to really do it properly,” Johnson says. “Because once the decision had been made, I didn’t want to just abruptly have Callie leave in the Season 3 finale… She was lovely and said, ‘Of course I’ll come back.’ So she went home and then she came back to do those episodes for us.” 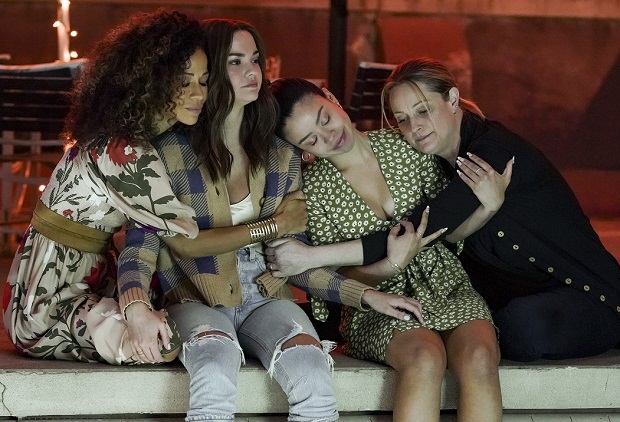 Naturally, Callie’s Fosters moms Lena and Stef and her brother Jude came to Los Angeles to help Callie break the news to sis Mariana that she was moving in two days to Washington, D.C., for her dream job at the ACLU.

“I’m really, really proud of how we approached it. I thought it was really thoughtful,” Mitchell says of Callie’s sendoff. “It’s nice to see Callie off and be excited for her and see so much growth. That was really important to me that she was chasing something that she really wanted that wasn’t coming from a place of reaction, that was coming from her taking control and taking charge.”

There was one person, however, that Callie didn’t say goodbye to: her ex-boyfriend Jamie. Just when it seemed like she might leave without sharing her big news with him, he showed up on the same flight as her. In a twist of destiny, he had also gotten a new job in D.C.

“Jamie being on that plane is just the cherry on top,” Mitchell says, adding that she was “cheering” when she read the scene. “I was so happy. I’ve always kind of rooted for them.”

The “Jallie” ending was actually one that Johnson has had in her back pocket for a while. “I pitched this a long time ago that [she] would get on the plane, and he would be there, if Maia were to leave the show,” Johnson reveals. “But then I was like, ‘Is it too coincidental?’ The writers and I talked about it, and we all agreed the fans want it. There needs to be a little bit of a happy ending to it, and it just felt like one of those rom-com moments that, even though it’s coincidental, you forgive because it makes you feel good.” 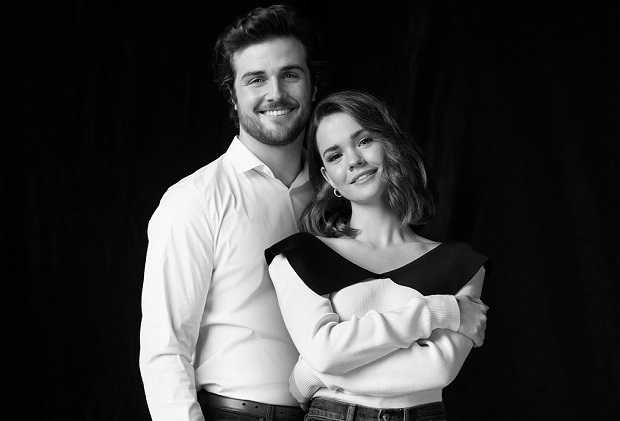 Plus, “the chemistry that those two have is just kind of undeniable, and the idea that the universe keeps throwing them together, it just felt like a really fun rom-com moment that we couldn’t resist doing,” Johnson says. “So it just felt like we had to do that. We had to send them off together into the sunset.”

Of course, that meant also saying goodbye to another cast member in Mirchoff, who was on board with the plan. “Beau is so amazing. He’s the nicest guy in the world and such a talented actor, and he was all for it. He totally got it,” Johnson says. “I think he really loves this show and doing the show, and we loved having him… But his story is with Callie. If Callie goes, it feels like he has to go [with her].”

Mirchoff — who had “no clue” that he would still be playing Jamie years later when he booked a three-episode arc on The Fosters — is “so extremely grateful for the job opportunity and everyone involved,” he says, adding that he and Mitchell had “really great chemistry, and I love her, and we get along, we have fun. So it [was] such a treat and a great job to be a part of.”

Looking back on Callie and Jamie’s journey and where they ended up, Mirchoff notes that the pair have “gone through so much together, and I think what’s left between them is such mutual respect, love and admiration. In the penultimate episode, they have that scene at the restaurant and all that’s kind of there. It’s a lot in the subtext, it’s a lot in their looks, how they are physically with each other. They just really care about each other. I think that was important to get across, and I think that it did.”

As for what awaits Callie and Jamie in their new city, Johnson is keeping mum in the hopes that Mitchell and/or Mirchoff will return for a visit. (“I hope that happens. [But] I don’t know what’s in store,” Mirchoff says, while Mitchell hints “it’s definitely very possible that you’ll see some Callie” again.) In the meantime, Mirchoff has his own theories about the pair’s romantic future.

“I don’t know if they should be together at this very moment,” he admits. “The seed’s planted, and if [there’s] enough water and sunshine and they keep the pests away, perhaps that plant can grow. I’m obviously so close to the role and everything that I like them together. But then there’s the other part that’s like it would be good for her to be single for some time. She’s been, it seems, basically a serial monogamist for quite some time. So it would be good for her to be single and focus on her new job and D.C. But at the same time, maybe fate is at play here, and maybe they are meant to be together.”

Adds Mitchell: “I do think that they are right for each other now that they’ve had their time apart and they’ve been able to meet with their values in the middle. They’re kind of an unstoppable little duo [who’s] going to take D.C.”

Good Trouble fans, what did you think of the double exit? Hit the comments! And press PLAY above to watch Mitchell and Ramirez describe just how difficult it was to get through Callie and Mariana’s teary parting.