Dwayne “The Rock” Johnson is still a 2032 presidential candidate on Young Rock, despite all but winning in the comedy’s freshman finale.

When the NBC sitcom returned for Season 2 on Tuesday, viewers caught up with the wrestler-turned-movie star as he once again gave actor Randall Park — and all of us — access to some of his most cherished memories growing up. For instance, Dwayne recalled beaming with pride when his father Rocky won the WWE tag team championship with his Soul Patrol partner Tony Atlas. The two were the first Black wrestlers to nab the honor.

Success always comes at a price, however, and suddenly, a preteen Dewey felt jealous that Tony and the Soul Patrol fanbase saw more of Rocky than he and his mom did. Rocky also started developing his own brand of envy when fans paid more attention to Tony than him. Sadly for the Johnsons, the good times didn’t last in Hawaii. And by the time the white-jeans loving Dwayne turned 15 in 1987, Rocky was struggling to provide for his family and had to take menial wrestling gigs in Nashville after the family got evicted.

Nashville creates a whole new slate of characters for viewers to get to know and love, including Bruno, a wrestling heel, and Bob Owens, a wrestling “carpenter,” whose job it was to lose. Rocky also became a different person who oversold Nashville and changed the way his son looked at him. Turns out Rocky didn’t secure an apartment, as he’d told Dwayne’s mom Ata. Instead, he was living in a one-star motel. 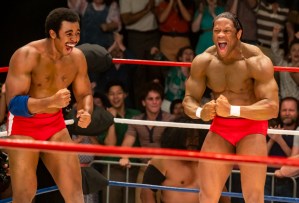 Dwayne grew more sympathetic with time because after college, his hopes of being drafted by the NFL turned to dust, and he had to move to Canada to play for the Calgary Stampeders. Adding insult to injury, Dwayne didn’t make the team and was reduced to the practice squad, where he barely made enough money to pay the rent and had to snag a dirty and discarded mattress from a — you guessed it — one-star motel.

Through it all, Dwayne relied on the love of his parents, grandmother Lia (whose portrayer, Ana Tuisila, stole every scene) and his college girlfriend Dany to keep his head up and fight until things got better. As an added twist, the episode closed with a hater from Dwayne’s childhood (guest star Sean Astin), who has begun disparaging his presidential aspirations online. We can’t wait to see how that ends.

What did you think of the Season 2 opener of Young Rock? And which memory moved you the most? Grade the premiere in our poll, and drop your thoughts in the comments.