On any other show, a woman in heels wielding a baseball bat would be no threat to two men. But Tyler Perry’s Sistas isn’t like other series, and when Season 4’s midseason finale airs this Wednesday at 9/8c on BET, Fatima and her bat are going to give the drama’s two biggest villains the business.

Crystal Hayslett, who has quickly become a Sistas fan favorite as Fatima, can’t reveal what her character knows about Hayden and Gary’s trespasses against her boyfriend Zac, or if the two dudes have anything to do with his exaggerated criminal charges. Whatever the case, we have no doubt she will figure out the truth (as seen in the exclusive photos above and below).

“Hayden and Gary have it coming,” Hayslett tells TVLine with a chuckle. “One thing Fatima does not play about is her Zachary. She comes ready to wreak havoc on Hayden and gets lucky. It’s not so lucky for them, but it’s lucky for Fatima and her bat. Tyler [Perry] is known for his cliffhangers, so you all are going to be in for a treat.”

Hayslett adds that the wooden slugger Fatima carries was written into the script, and it’s a weapon she enjoyed using while in character. 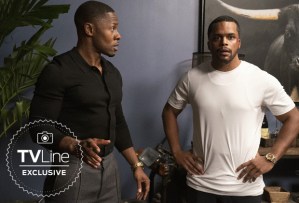 “I have fun playing Fatima,” the actress shares. “I’m such a happy-go-lucky positive girl, so when I get to tap into that other side, it is so much fun. It was a blast shooting that scene with Chris [Warren], who plays Hayden. He is so funny, it’s hard for me to keep a straight face. If you notice, in some of the parking garage scenes, I am literally laughing out loud because he is so funny and he plays a villain so well. I enjoyed doing that scene, and chasing after him with a bat.”

Shooting the scene where Fatima shatters Hayden’s car windows wasn’t easy, Hayslett reveals, because although breakaway glass is safer than real glass, it can still cut a person.

“We did a stop-and-go shoot for safety measures, so it took a while,” she says. “That was breakaway glass and I was wearing heels, so there were stops to make sure I was safe because there was glass flying everywhere. I had to stay in character the entire time, and my adrenaline was going so I didn’t feel anything until the next day. I was sore, and I could feel the tension and pain from swinging the bat and running in heels.”

The whole experience was similar to fight or flight, Hayslett observes.

“I’ve never been in a car wreck, thankfully,” she says. “But it’s almost like when people who are in car wrecks say they’re fine that night and then they wake up the next day in pain. Or if you haven’t worked out in a while and you wake up sore because your adrenaline and mind have been racing.” 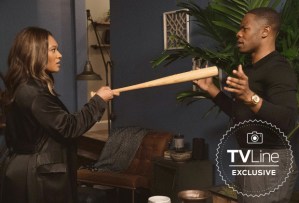 Described by many viewers as the perfect blend between Olivia Pope (or “Olivia Nope,” as Zac teased) and Madea, Fatima is nobody’s pushover. So could it be possible that the character is in fact related to Perry’s beloved, distaff alter ego?

Hayslett isn’t ruling out a connection.

“So many people ask me if Fatima is related to Madea,” Hayslett admits. “But who knows? We may find out later on Madea is her great aunt. Fatima and Madea are alike in that they are gat-toting women. They keep a gun in their purses at all times, and they both stay ready for whatever.”

Are you excited about the Sistas midseason finale or bummed that Season 4B isn’t returning until Wednesday June 29? And what do you think Fatima is going to do to Hayden and Gary? Drop your thoughts in the comments.