When Season 1 of NBC’s Young Rock came to an end, a lot of fans said they wanted more wrestling added to the mix. And that’s exactly what they’ll get when the sitcom returns for a heartfelt Season 2 this Tuesday at 8/7c.

Young Dewey will fight in the ring during a daydream sequence in the season opener, and Adrian Groulx, who plays the youngest Rock, had to rock wrestling shorts to pull off the scene. But he says it was totally worth it.

“I loved being out there,” a beaming Groulx tells TVLine. “Even while they were practicing, it was like the best thing ever. I had so much fun, even before we got to the part of Dewey doing his wrestling bit. We got to see the other wrestlers, and I was like, ‘Whoa. I’m about to do that.’ At first, I didn’t know how to feel about wearing those shorts. But after seeing the audience, I completely forgot about what I was really wearing, and I was not self-conscious about it at all.”

It’s during this part of the premiere that Rocky, Ata and Dewey are living high in Hawaii. Rocky and his Soul Patrol wrestling partner Tony Atlas had just become the WWE’s first Black tag team champions, and they had the belt and the swagger to prove it.

During Dwayne’s teenage years, however, Rocky struggled to find work, and the Johnson family got evicted and ended up in Nashville in 1987, where their finances were spread especially thin.

“The Nashville years were prior to Pennsylvania and were a lot harder for him,” Bradley Constant, who costars as teenage Rock, observes. “It was just a lot tougher, and he started demystifying Rocky and learning how to be comfortable being uncomfortable.”

Also explored are Dwayne’s post-college years during the time he moved to Canada to play for the Calgary Stampeders after the NFL didn’t draft him. Not only was he colder and broker than he’d ever been before, but he was miles away from his family and his then-girlfriend Dany. 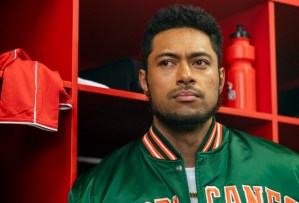 “If you’ve been to university, then you know those struggles after you graduate,” Uli Latukefu, who plays the eldest Rock, teases. “Dwayne had more of those struggles, but that’s also when he drops down to his ‘seven bucks’ moment, and there is eventually a huge turnaround for him.”

Are you excited about the Young Rock Season 2 debut? Drop your thoughts in the comments.