By the time The Cleaning Lady‘s freshman finale came to an end on Monday night, Thony De La Rosa had 1) disentangled herself from a sticky legal situation, 2) gained access to the Barsamian syndicate’s substantial finances, which she now controls, and 3) swatted away the mosquito that is FBI Agent Garrett Miller, at least for the time being.

But none of those wins meant anything when she returned home to find her son Luca’s bed unexpectedly empty: Thony’s husband, Marco, had taken the boy while Thony was gone, and they were likely well on their way back to the Philippines against Thony’s wishes.

To break down that stunning cliffhanger, TVLine spoke with executive producers Melissa Carter and Miranda Kwok, who also shed light on the show’s renewal prospects (Fox has yet to order a second season), Arman and Thony’s complicated relationship (is it love?!) and two of the finale’s standout musical moments.

TVLINE | At the time we’re speaking, there hasn’t been any news about The Cleaning Lady‘s fate. Have you gotten any insight from Fox on how things are looking?
CARTER | It looks very positive, but they do want to hear our Season 2 pitch, which Miranda and I are working on… They’re very happy with the numbers, they’re very happy with the Hulu streaming numbers, so fingers crossed we’ll get a pickup… People just don’t watch TV as much on the night, but people are watching it after.
KWOK | And honestly, they’ve been really excited about this show from the beginning, even from when it was first pitched. Right before the pandemic, it was the first drama pilot that got picked up. They’ve been in full support of this project, and then they were happy with what we delivered, and the last piece is the numbers.

TVLINE | Pivoting to this finale, let’s start with the cliffhanger after Marco takes Luca. How did you arrive at that scene as the ideal stopping point for Season 1?
KWOK | A lot of the season has been about Luca in jeopardy and about Thony saving her child. A big question for Season 2 is, what is she going to do once her child is saved? That was one of the elements of why we chose that ending in particular. But that conflict between Thony and Marco has been brewing throughout the season. We actually had the idea of [showing the flashback of] Thony taking Luca from Marco in the Philippines early on, and we were going to have it in Episode 2. We ended up doing other things, and it came up that it was a nice bookend for the finale, but obviously the circumstances were very different for why Thony took Luca to begin with. She knew she had to get that bone marrow donor before he backed out, and she was right in that he did back out. At the same time, it’s very, very difficult for people — especially Filipinos — to get a visa to come to the United States. The fact that [Marco] didn’t get his visa granted wasn’t a mistake; it was intended, because they always want to make sure you have a home base, you have a family, a job, so that you won’t overstay your visa and stay undocumented. So Thony actually had very justifiable reasons to take Luca. And then we got to the finale, and looking at Marco’s point of view, it also really made sense. From his point of view, Thony has been running around with gangsters, and now is mixed in with the FBI, and she could be arrested. In his mind, he had every right to take Luca home, which is where he thinks he should be.
CARTER | From Marco’s point of view, they got the help they needed for Luca. His whole thing is, “We always agreed we would go back home afterward.” Luca would get the help he needed, they’d return to the Philippines. There’s different points of view for who wants to stay and who wants to go back, and Marco’s drive has always been, “Let’s go back where my parents are, where our lives are.”

TVLINE | Looking toward a potential Season 2, what can you say about where Thony would be, emotionally and mentally, in the wake of this happening? How would she move forward?
CARTER | To start off the season, we’re definitely going to have her drive being to get Luca back. We can’t divulge too much of how that happens. [Laughs] But we do have some exciting things planned for how she’s going to do that. Is she going to dip in and use her contacts within the FBI or the criminal world? Or is she just going to take it on herself?

TVLINE | And on the business side, we now have Arman and Hayak on decent terms, Thony has access to the syndicate’s money, Nadia’s still in the picture… Where do you see the business going from here?
CARTER | We did say in the finale that Thony intends to start her cleaning business to clean Arman’s money, and to have a medical clinic in the back where they can help the undocumented, the uninsured — people who are in the same vulnerable position that she was in. We’re definitely going to embark on that business where all of these unlikely people have to become partners, and [we’ll explore] all of the fissures and problems and conflicts that will come out of trying to work together, and not always seeing eye-to-eye on how a business should be run. That is a major part of Season 2. 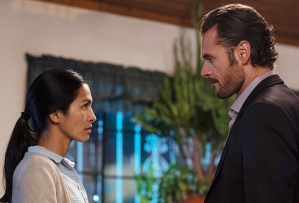 TVLINE | I have to ask about Thony and Arman’s relationship — there’s obviously such chemistry there, but Thony made clear that she wasn’t going to cross certain boundaries this season. How would each of you describe what they currently feel for each other?
CARTER | I feel that they’re both falling in love with each other, but there are so many reasons they can’t be together. That’s the juice of a really well-told soap story. Keeping that sexual tension — and it’s not just romantic, and it’s not just sexual tension. They have a really unique and unusual partnership where they respect each other, they like each other. When I think of Arman, he has two very different women in his life, and he’s in love with both of them. It’s not so clear-cut and easy, whereas Thony is kind of done, for the most part, with a marriage with Marco. She has so much else going on — including her good sense, which is saying, “I shouldn’t run off with a gangster, this doesn’t make sense” — but she can’t deny those feelings she has for him.
KWOK | They have a bond that is different and deeper than any other kind of relationship. It’s something that they don’t even fully understand themselves. From my point of view, I wouldn’t even say it’s romantic. It’s more a deeper understanding. They see each other in a way that no one else does, they understand each other in such a core way that they don’t have in their lives. That’s what makes their relationship so fascinating, and what continues to draw them to each other.
CARTER | In the writers’ room, we always said Thony was a reminder of the good person Arman used to be, before he made that choice to pursue a life of crime. Where Nadia is always completely on board with his criminal life, Thony is like the little [angel] on his shoulder, saying, “Are you sure you want to be this person? You’re better than this. You’re good.” She often holds up a mirror to him and asks him to look into his choices, his life. That’s what’s great about the dynamic between the two women: One is a safe choice, but Thony challenges him in a way he hasn’t been challenged in a really long time.

TVLINE | Before I let you go, let me say how much I loved two needle drops in this finale: Geri Halliwell’s cover of “These Boots Are Made for Walkin'” and Billie Eilish’s “you should see me in a crown.” Did you know early on that you wanted both songs in there?
KWOK | Yeah. We have fantastic music composers and music supervisors that sometimes suggest songs, but those two moments I actually did write into the script. They spoke to me for those moments, for sure.
CARTER | When we were scouting locations for the pilot, on the intercom they were playing the original “Boots Are Made for Walkin’,” and Miranda says, “We’re gonna use this, but I want a newer rendition. I want something more modern and fun.” So that was a long time in the making.
KWOK | And Melissa and I had a little dance as we were walking out. We did the strut, together, that Thony and Fiona do at the end.

Your turn! How did you feel about that Cleaning Lady finale? Grade the episode in our poll below, then hit the comments with your full reactions!