In Sunday’s episode of The Walking Dead, Lance’s master plan to bring Alexandria, Hilltop and Oceanside under the protection of the Commonwealth — and make himself, in effect, their Pamela — hit one speed bump after another until finally it crashed into a total roadblock. What — or should we say who — was it? Read on… 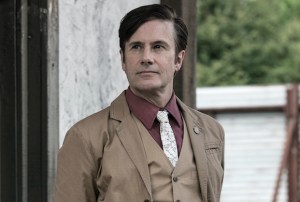 ‘AMBITION IS NOTORIOUSLY HARD TO REEL IN’ | Right from the start of “The Lucky Ones,” we could tell that Lance was going to be fighting an uphill battle to sell Pamela on his idea. “There’s enough to do at home,” she argued, “without having to worry about a couple of small communities in another state.” What’s more, Alexandria didn’t exactly impress the governor, what with a walker ambling down a street and the revelation that former leader Deanna had been bitten and had had to be put down. Things went even worse in Oceanside. Pamela loved the beach, of course, but was chagrined to learn that Rachel wouldn’t enter into the agreement if Maggie and Hilltop didn’t — and Maggie and Hilltop, she added, weren’t going to. “If Maggie says no and Oceanside walks,” Lance warned Aaron, who seemed to be acting as a realtor of sorts on the deal, “Alexandria’s cut off.” Shortly, the Commonwealth convoy came across Maggie and some Hilltoppers fighting walkers in the road. Introductions were made, and off Maggie and Pamela went to talk. 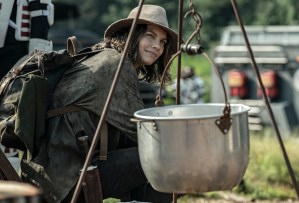 Though the governor was slick as can be with her sales pitch, she failed to sway Maggie, who noted that Pamela lived like a queen while her community did not. “A leader,” she insisted, “has to give her people something to look up to.” Yeah, it was like that. Later, back at Hilltop, Lance took a shot at convincing Maggie to change her mind. “We can have so much more,” he said. “Imagine being able to pick up Hershel after a concert at the Commonwealth, take him to a doctor’s appointment in Alexandria, jump in a boat at Oceanside traveling up the coast… ” But in the end, Maggie stood firm; she didn’t want to find out the cost of having the Commonwealth’s support — even if that meant Dianne and others leaving. Alone with Lance, Pamela told him that he could continue to pursue his new outposts, but if his work at the Commonwealth suffered, there would be consequences. Clearly taking it all super well, Lance walked into a field and shot in the air to draw walkers that he could use for target practice. Was he, uh, OK? asked Aaron. “A+,” he replied, a mad gleam in his eye. Guess now we know why Daryl and the troopers rolled up on Maggie and Hilltop in the Season 11B premiere (recapped here). 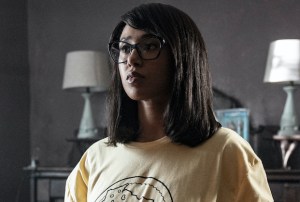 ‘PINEAPPLE ON PIZZA MAKES NO SENSE’ | In other developments, Ezekiel went in for a routine checkup, only to be told by Tomi that he’d be having surgery the following day. In no time, the former king realized that Carol had intervened on his behalf and objected. “It’s cheating!” he cried… before ultimately relenting and agreeing to get his tumor removed. We also learned from Max that she’d been about to go meet Eugene at the rail yard as planned when she’d gotten busted by her brother, Mercer. Then, when Eugene had arrived at the Commonwealth, he was with another girl! Eventually, he apologized for turning away from Max when she revealed herself and explained, as best he could, why he’d believed Stephanie was the woman with whom he’d been conversing. By and by, the temperature in the room thawed, and by the time the would-be couple started discussing his novel, it was clear that they were going to make up, if not kiss.

So, what did you think of “The Lucky Ones”? Hit the comments with your reviews, questions, comments.