Will Resident Alien‘s General McCallister ever come face to face with Alan Tudyk’s peculiar E.T. Harry Vanderspeigle? Even Linda Hamilton, the actress behind the show’s main antagonist, isn’t quite sure. Yet despite her limited screen time and the many questions surrounding her character’s looming presence, the actress is having a blast as she waits to unravel more of McCallister’s sinister plans.

“Always be the one on stage who doesn’t speak because people are always looking at you and waiting for you to do so,” Hamilton tells TVLine. “I’m happy with that part!”

While McCallister mostly remains a mystery, here’s what we know ahead of Wednesday’s midseason finale (which airs at 9/8c on Syfy): The General is monitoring and detaining suspicious individuals who have been abducted by aliens (possibly the Greys) in the past. Included in that bunch is Ethan Stone, a medical practitioner she nabbed after little Max fingered “the doctor” (meaning Harry, not Ethan) as an extraterrestrial. And when she was a child, she, herself, experienced an alien encounter with her father, which sadly led to his suicide after no one listened to him and he was “tricked into believing he was crazy.”

“She’s a very singular woman with big powerful resources behind her,” says Hamilton. “She’s spent her whole life searching for an alien life form, and she’s not going to stop until she finds it.”

However, her quest to prove her dad was right, makes her “want to do awful things.” But the real question up ahead: “How does she deal with all that rage? When you’re fueled by that kind of mad vision, a life-long vision to prove something, mistakes are made,” hints Hamilton. 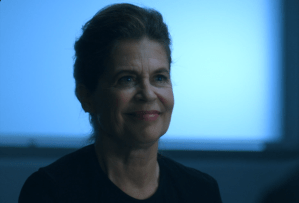 Beyond that, the actress is tight-lipped as to what’s in store for the remaining nine episodes of Season 2. (The back eight will air some time this summer.)

“Let’s just say it’s very much a continuation of her mission, but she’s getting a lot closer than I had ever hoped,” she teases. “General McCallister is off on her own quest, like with a B-Camera, but I’m homing in!”

“One of the things I wanted to do with [Hamilton] this season is to give her a little more meat to play,” adds creator and executive producer Chris Sheridan. “A lot of the stuff was already written before we cast her last year, so this time, we can write to her strengths. We tried to make her character a little more three-dimensional, find out what makes her tick. I’m excited for people to see it.”

And while Harry finally took care of the nasty Lisa Casper in 207, Lieutenant Logan (played by Alex Barima) and McCallister will soon be reunited, Hamilton confirms. “I love working with Alex, and they’ve written us some really fun stuff. There is definitely more to the McCallister/Logan show.”

But no matter what lies ahead for the General, Hamilton is simply enjoying the ride. “I come home and go, ‘I got to push a guy off a cliff today!’ or ‘I got to stab a man in the hand with a fork!’ [Laughs] It’s just so well written, and it’s so much fun to read.”

She continues: “I’m such a fan of Chris Sheridan’s and Alan’s, and the whole team that’s been assembled. I feel like [the show] is what the world needs right now.”