We don’t want to say for sure, but it kind of looks like Eve and Villanelle are never, ever getting back together.

This week on Killing Eve, the cat and mouse came back into each other’s orbits as Villanelle crashed at Eve’s hotel room and sought help from therapist Martin after last week’s double murder. A wary Martin told Villanelle that’s a good sign, since true psychopaths don’t want to change. Villanelle also confessed she’s still obsessed with Eve (“She’s a rainbow in beige boots”), and when Eve arrived, it looked like they might get some much-needed couples therapy. But instead, Eve told Villanelle, “I should’ve done this when we first met” — just as cops in tactical gear burst in to haul Villanelle away in handcuffs.

That twist “felt like a really pivotal moment,” head writer Laura Neal tells TVLine, “because it feels like something Eve should have done back in Season 1.” Eve has changed a lot since then, she adds, and we’re seeing “this new Eve who finally understands Villanelle’s power over her and understands that if she lets that chaos in, then it can consume her.” Now Eve is “emboldened enough to actually finally take that step to remove Villanelle from her life.” But that raises more questions for Eve, she notes, such as: “What is my life without Villanelle in it?” 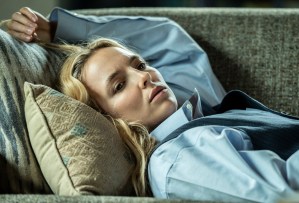 As for Villanelle, the sudden turn comes as a shock, Neal says: “I don’t think Villanelle ever believed that Eve would do something like that, and for Eve to do it and to see it through, it’s such a huge betrayal of Villanelle, but it’s also a realization that perhaps her grip on Eve is slipping. And I think that’s very discombobulating for Villanelle.” (Uh-oh… a discombobulated Villanelle is a dangerous Villanelle.)

Eve is also inching closer to the shadowy people at the top of The Twelve — so is there a chance she won’t survive this mission? “I think we should be worried for her,” Neal admits. “She has destroyed everything, or has had those things in her life destroyed, and she can’t possibly go back there. So I think there’s a kind of a nihilism to her, but there’s also a freedom to her, which I think is quite intoxicating.”

We’re now just a handful of episodes away from the Killing Eve series finale, which is set to air April 10. Neal doesn’t want to give away too much, but she will say: “I think fans can expect an exciting, thrilling, emotional, satisfying end to these two extraordinary characters’ journeys.”

Share your thoughts on this week’s Killing Eve (and your series finale predictions) in a comment below.