This post contains spoilers from the March 10 episode of grown-ish.

Vivek has long been the comedy foil on Freeform’s collegiate rom-com grown-ish. Much to actor Jordan Buhat‘s delight, however, his former drug-dealing character has a lot more depth in Season 4.

In the first half of the season, Vivek got expelled for selling drugs and suffered the crushing blow of being disowned by his father as a result. In this past Thursday’s installment, Vivek had reunited with his dad only for him to unexpectedly fall ill and pass away. No one stood by Vivek’s side through this tragic loss more than Ana (played by Francia Raisa), his friend and roommate.

Making matters more intriguing, Vivek has romantic feelings for Ana after hooking up with her in the midseason finale. At first, Ana shunned Vivek’s attempts to become more than friends. But given how much the aspiring businessman has evolved, that could change by the Season 4 closer, which will air Thursday, March 24 at 10/9c.

“It has been really crazy to explore a possible romantic relationship with Vivek and Ana,” Buhat excitedly tells TVLine. “Vivek has been such a good friend to all the characters on grown-ish, but there’s a really special relationship he’s enjoyed with all the women on the show. For the two of them to all of a sudden ‘slip up’ is wild. Now he’s catching feelings, a little bit, maybe, and it’s crazy that that would even happen. I did not think that would happen with Ana.” 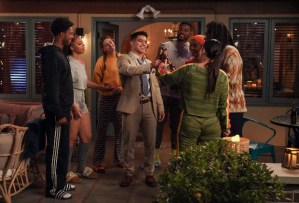 In retrospect, Vivek is the one who knew what kind of watch Ana’s ex-boyfriend Javi should buy her as a birthday gift. And Ana is the one who told Vivek to reach out to his dad. She also stayed with him at the hospital when everyone else split. Did we mention that sex dream Ana had about Vivek?

As for Vivek, he’s had to man-up lately, delivering words of wisdom on depression to Jazz, encouraging Aaron and Doug not to wallow in their sorrows, and performing a eulogy at his late father’s funeral.

“Vivek has made so many mistakes, but sometimes he does somethings OK,” Buhat observes. “He hasn’t had a lot of big speeches where he gets to inspire change but this season, he has. He has implemented change into his friends and it’s been a lot of fun to see him grow.”

Are you shipping Vivek and Ana and are you feeling the more adult-ish Vivek? Drop your thoughts in the comments.