Warning: The following contains spoilers from Upload‘s Season 2 finale. Proceed at your own risk!

But first, Ingrid was determined to put a baby in Nathan, who confessed that he didn’t want a child or a girlfriend. Ingrid cracked, revealing that she has not only been growing his body back to life so he can download, but she has also been alive this whole time. “I owe you nothing. Goodbye!” Nathan replied, walking away.

After Ingrid’s big surprise, Nathan and Nora realized they have what they need to break into Freeyond, which Choak is using to tip elections in swing states. They pair plotted to steal Nathan’s body, with the help of the Ludds, so he could download and use his retina to pass the Freeyond security scan. But when Nora and the Ludds arrived at the NeckGen building, they found a desperate Ingrid talking to Nathan’s body. Nora appealed to the other woman, assuring her that she’ll find true love one day and that she’s a good person.

After Nathan was downloaded back into his bod and reunited with Nora, Ingrid softly confessed, “All I ever wanted was for you to look at me the way you look at her.” Nathan apologized and thanked Ingrid, who told Nora to take good care of this client. (Ingrid wasn’t entirely “good,” though, collecting a lock of Nathan’s hair from an old hairbrush at the end of the episode.) 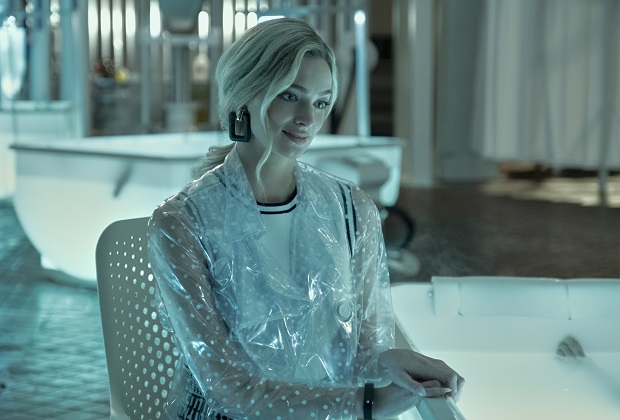 “You have that nice moment where you see the human side of Ingrid,” star Robbie Amell says of the goodbye scene. “[Allegra Edwards is] so good at playing that kind of psycho ex-girlfriend or girlfriend, but then she’s such a sweet and charming person in real life that when she turns on the honesty, you can’t help but be like, ‘I feel for you. Maybe it’s not your fault. It’s the way you were brought up, it’s the people. It’s something that isn’t your fault.'”

Nathan and Nora then got cozy in their own private train compartment, complete with a very narrow bed. When Nathan offered to sleep on the floor, Nora told him that she wasn’t missing out on this. “As a fan of the show, I knew how important it was and that two seasons had been building up to this moment,” where Nathan and Nora were able to finally act on their feelings, Amell shares. “I felt that inside when we were shooting it. It was exciting, it was nerve-racking, and it was great to have that kind of feeling about a project that I’m a part of… And anyone could have chemistry with Andy [Allo]. She’s so charming and so sweet.” 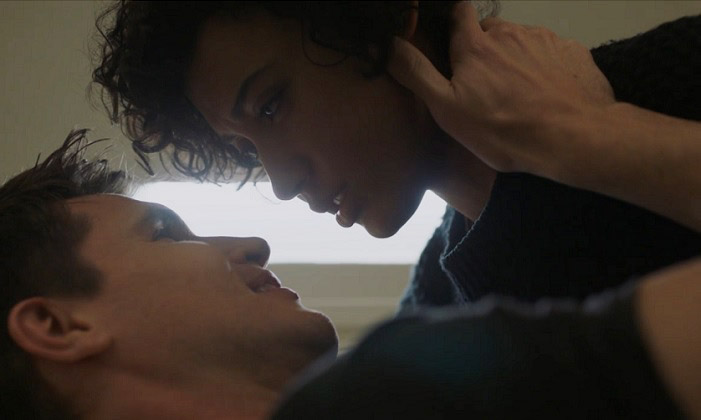 Adds Allo: “There’s such a beauty and such a care that we all came into it with and the director [Jeffrey Blitz] as well. It was a beautiful moment. As a fan, I loved reading it, because I just was like, ‘Yes!’ Now the cliffhanger is a whole other conversation. I was just like, ‘Oh no, don’t do that. Don’t do that!'”

Speaking of that cliffhanger: Nathan rose from a slumbering Nora to discover he had a nosebleed. (Remember, 80 percent of downloaded pigeons survived 24 hours before their heads exploded.) “A nosebleed is not a good sign,” Amell warns. “I don’t know how much time he has left. I don’t know if he needs to re-upload.”

If the show gets renewed, Amell might actually be working triple duty. After Nathan went into the grey zone to escape Lakeview, Aleesha’s temp noticed he was missing and frantically began restoring him from backup. “I’m a little worried about how many Nathans there may be next season,” Amell says, “because you’ve got them rebooting from a saved file, you’ve got the real world one, and then I don’t know what Ingrid’s doing with Nathan’s DNA. I don’t know if it’s for a kid or for another Nathan.”

On a much less ominous note, the finale also featured a fun surprise voice cameo when the tied-up NeckGen employee phoned for help and was greeted with the following message: “Hello, I’m Officer Jennifer Garner, an automated system with the voice of Jennifer Garner that can handle complete emergencies.”

“We’re always trying to do little, satiric comments about the future, and a lot of it is taking stuff that is today and just exaggerating a little bit,” creator Greg Daniels describes. “So the idea was that when you call 911 in the future, you get a recorded announcement similar to something you’d find in the back of a New York City taxi cab.”

And the former Alias star was game to be a small part of the episode. “An old friend of mine had been the producer on a couple of her shows, so I’d met her before,” Daniels shares. “She seemed to think it was fun.”

Upload fans, what did you think of the season ender? Grade it below, then hit the comments with your thoughts!