What do you do when your ghost boyfriend ghosts you? In Upload‘s Season 2 premiere, Nora still hasn’t heard from Nathan, and the ghosting goes both ways, because Nathan also gets the unintentional cold shoulder from Nora during the episode. 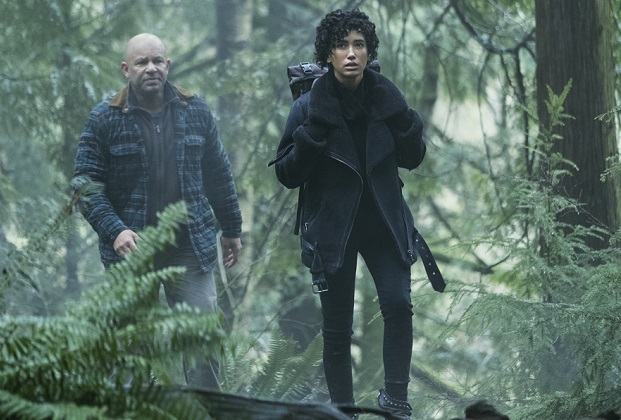 The half-hour starts with Nora ditching Byron and hoping into another car with her dad, who takes her to the Ludd camp to keep her safe from the people connected to Nathan’s death. The movement’s followers reject technology — Nora ditches her phone on a tree branch in the woods — and eat actual food grown in the ground from heirloom seeds. But not everything about the back-to-basics group is appealing: Nora isn’t a fan of Pastor Rob’s “patriarchal backwards creep show.” Community leader Matteo (Royal Pains‘ Paulo Costanzo) assures her that not everyone is like Pastor Rob, who hates all digital afterlife. Nora settles into her new home and just a few weeks later, she’s the one giving the welcome speech to the newbies and growing food alongside Matteo.

Meanwhile, Nathan is finally released from 2 Gig now that Ingrid is done redecorating their suite (their bed is “the width of a king, but the length of a queen,” she explains) and calls for his angel. Aleesha appears and explains that Nora’s been MIA for weeks, leaving Aleesha to juggle two sets of clients, as well as “one extremely difficult Karen,” aka Ingrid. (The one upside to having a high-priority client? Aleesha gets a promotion to Junior Manager and her own temp.)

After being cornered by Luke, who was seriously missing his BFF, Nathan escapes to the schvitz bath to trace Nora’s phone and hack into her Nitely account in hopes of finding her. He spends hours every day searching, telling Ingrid that he’s going to the gym.

Back at the Ludd camp, Matteo and Nora share a cute moment over a giant potato, and he asks if he’s alone in feeling something. Nora replies no, but there’s kind of somebody back home. While she’s at the post office, dropping off old-fashioned mail (“It’s an envelope. It’s how your ancestors got spam,” one of the Ludds explains to the noobs), Nora decides to use an avatar to check in on Nathan, who’s returned from his “schvitz” to Ingrid.

Ingrid acknowledges that her uploading was impulsive and controlling. She then asks Nathan if he fell in love with another upload. He admits that he had feelings for someone, but it’s over. Ingrid isn’t completely surprised by his confession. “You’re great. A lot of people are gonna love you. Just not as much as me,” she says sincerely, while promising that she can change and earn his love back. Nathan kisses her as Nora’s virtual cat avatar looks on and the scene cuts to reveal that… Ingrid is in a hug suit, not dead!

An upset Nora returns to the Ludd camp and invites Matteo for a drink, while Nathan gets up from his and Ingrid’s bed to leave Nora a voicemail. He tells her he loves her, too, and that he doesn’t deserve someone like her. Since she’s not answering his calls, he has to accept that she doesn’t want to talk to him. “Goodbye, angel,” he concludes as Nora has a phantom phone ping.

As for the murder mystery, a NYC Cyber Crimes Unit detective is looking into the elevator death from last season, and he suspects it’s a possible homicide.

Upload fans, what did you think of the first episode and that Ingrid twist? Grade it below, then hit the comments!