With the pain of Macy’s death still fresh, Charmed returned for its fourth season on Friday, reconstituting the Power of Three with the help of a new witch — even if she didn’t exactly realize what was happening.

Mel and Maggie’s quest to find the mysterious fourth witch prophesied by the Guardian last season led them to Philadelphia, where they met a struggling artist named Kaela. (Short for Mikaela. With an “M”!) In addition to being an apparent Charmed One, Kaela is revealed to be a powerful conjurer, whose talents accidentally turn Josefina into a paper drawing and summon a demon from the drawing’s negative space. It really was quite a first day.

Meanwhile, Jordan uncovered a connection between two docile magical creatures inexplicably turning aggressive. He just doesn’t know the being’s name yet, which is good, because we saw what “The Tallyman” did to that poor pixie who merely tried to write it down. Bleeding from the eyes? No thanks!

Below, Melonie Diaz (Mel) and Sarah Jeffery (Maggie) answer TVLine’s burning questions from Friday’s premiere, from the new girl to the new threat and beyond:

TVLINE | How would you describe Jordan and Maggie’s relationship at the moment?
JEFFERY | We pick up in a spot we haven’t seen them in before. They’re finally taking their relationship to the next level. Maggie’s really on her demon hunting s–t. And Jordan is a fantastic partner. We both have dance backgrounds, so that’s also great. 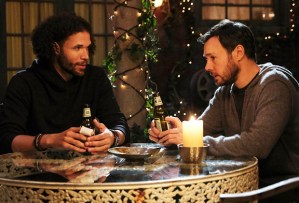 TVLINE | He can heal, which comes in handy, but he’s not a Whitelighter. Will Maggie help him on that journey of figuring out what he is?
JEFFERY | I think that’s a personal journey from him. To be perfectly honest, we haven’t really figured out what he is yet. It’s still kind of a question mark, still. But he’s definitely something, and he’s definitely useful. He comes in handy throughout the season, so hopefully we’ll all find out what the heck’s going on with him.

TVLINE | And Mel is clearly living her best life at The Blue Camellia. But does this mean she isn’t with Ruby anymore?
DIAZ | I don’t think so. But that relationship is not completely dead in the water. They learn how to be really good friends, and she helps us with some other stuff in our journey of fighting demons. Mel has to reevaluate how she was in that relationship, whether or not she was a good partner. Talking about that with her helps her to be a better partner to other people.

TVLINE | That is a bummer, but hey, there’s no shame in being single.
DIAZ | Right? I feel like we saw a little bit of Mel having fun in Season 1, but she was always in a series relationship. I’s cool to see her finally being single and ready to mingle. And I enjoy seeing Mel with various women. I think it’s important for the community to see that.

TVLINE | But Mel’s clubbing and Maggie’s slaying are really just their way of distracting themselves from…
JEFFERY | …the elephant in the room. We’ve lost a sister. I actually watched the pilot for fun not too long ago, and it’s like [Mel and Maggie] have swapped positions. Maggie was the one going out and living her life after their mom died, and Mel was the really angry, out-for-revenge one. We see in Season 4 that it’s all been turned on its head. Mel is handling it one way and Maggie is handling it another way. And that’s OK, because grief looks different on everyone, which I actually think we handled quite well.

TVLINE | And you did reference Macy quite a bit in this episode. How will you keep her memory alive moving forward?
DIAZ | Macy’s death and even the character have a presence throughout the entire season. We do what we do because of her. We want to be witches because of the Power of Three. We’re always thinking about her. Even when Kaela comes around, we’re always thinking about our sister. Macy’s always somewhere around them, especially in the house.

TVLINE | Speaking of Kaela, adding her to the fold is really shaking up your dynamic as sisters.
JEFFERY | Absolutely. When we found out we were Charmed Ones in the first season, there were some speed bumps. We had some learning to do. And now we find ourselves in the position of having to pass that knowledge on to someone else. That’s kind of cool. We’re not baby witches anymore, we’re grown-up witches.
DIAZ | We’re helping her learn how to hone her powers, but the funny thing is, the three of us really have no idea what we’re doing. We’re still figuring it out together with every mission and every demon. 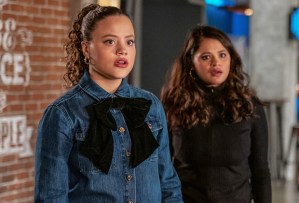 TVLINE | You’ve accepted her as a witch, but what about as a sister — if she is, in fact, family?
DIAZ | They know and feel that if the Power of Three [reactivated], she has to be their family in some way. That’s what the season is about: figuring out how she fits into the Power of Three. Mel is welcoming and warm because she feels that Kaela completes this thing that can be used to help other people.
JEFFERY | It takes Maggie a little longer to come around. She has a few more reservations. She doesn’t want to feel like they’re replacing Macy, either. But at the end of the day, the three of them do make this iconic trio.

TVLINE | And what about this “Tallyman” fellow? Should I be worried?
JEFFERY | Oh, he’s mean. He’s not nice. He brings a boatload of issues with him. He’s a real trickster, a fan of puzzles, so that keeps it interesting. He’s one of my favorite villains we’ve had.
DIAZ | Mine too. He preys on people’s vulnerabilities in a very human way, and I think the most evil people in life are like that. He’s a very sadistic person, but I think a lot of people will be like, “I know someone like that!” [Laughs]

TVLINE | Is it bad that when I saw his name, my first thought was “Come, Mr. Tallyman, tally me banana”?
JEFFERY | [Laughs] Not at all. We sing that on set all the time.

Your thoughts on Charmed‘s soft reboot in Season 4? Grade the premiere below, then drop a comment with your full review.