It was a scene that only Legacies could deliver: Klaus’ vampire ex-girlfriend from the second century having a heart-to-heart with Alaric and Jo (and Caroline’s) heretic daughter about being judged by their mental health struggles. And it was wonderful.

TVD, Originals and Legacies: 26 Actors Who Crossed Between Shows

Thursday’s episode found Hope and Lizzie at odds over the best way to handle Aurora, with Hope opting to take the classic Mikaelson route (aka senseless torture of the Papa Tunde variety) and Lizzie making the case for a considerably less painful dive into their captive’s subconscious.

Lizzie was successful in absorbing everything Aurora knows about the gods, even if it required her to disguise herself as Aurora’s dead brother Tristan, but that still wasn’t enough for Hope. She ordered Lizzie to stake Aurora in the heart, which she almost did. By missing her target by mere inches, Lizzie not only saved Aurora’s life but also broke her sire bond. (Hey now!)

“I couldn’t let you die without apologizing for calling you crazy, being dismissive [and] judging your symptoms and not their cause,” Lizzie later told Aurora. “[And for] treating you the same way everyone treated me whenever I’d have an episode. I used to think of my brain as a weakness, but maybe all of the issues I’ve struggled with are what allowed me to break the sire bond.”

It was a beautiful message, and a refreshing take on a character previously written off as a “crazy ex-girlfriend” (even by yours truly). It was also the start of a very unlikely partnership. Seriously, Lizzie and Aurora teaming up to manipulate the gods’ time-and-space powers to bring back Tristan and the life that Lizzie once knew? Never in my wildest dreams would I have imagined that such a thing would come to pass, and now I can’t wait to see it unfold.

Oh, and Hope totally pulled a Damon at the end of the episode by tricking some unfortunate townie into getting out of his car in the middle of a darkened road. But at least she treated him to a nice dramatic speech before leaving him for dead at the entrance to Mystic Falls. It was like dinner and a show. (A show for him… and dinner for her.) 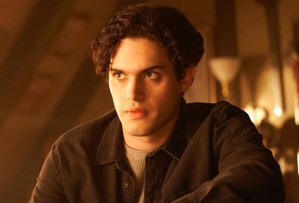 Meanwhile, Legacies‘ answer to the Three Musketeers continued their ongoing efforts to get the hell out of limbo, a plan made infinitely more difficult by their scheming jinni — a 50/50 mix of Jack Sparrow and an Avatar. Accurately deemed “the bloody Jeff Bezos of the afterlife,” he conned the trio out of their first wish by conveniently forgetting to tell Landon and Ted that Alaric isn’t technically dead. It wasn’t a total loss, as Landon was brought up to speed about all things Salvatore School during his brief return, but it still wasn’t ideal.

Alaric then used the group’s second wish to reinstate Ted as the Necromancer, only for Ted to double cross him by solely reviving Alaric, leaving Landon in limbo for all eternity. But wait, another twist! The jinni then revealed that Alaric’s wish came with a few stipulations: Not only are Ted’s new Necromancer powers limited to reviving Alaric and Landon, but should the Necromancer attempt to wish himself out of his contract, his request would be null and void.

So for those of you keeping score at home, Alaric is back in the land of the living, Landon is chilling in limbo, and the Necromancer is… honestly, your guess is as good as mine.

Your thoughts on Thursday’s Legacies? Drop ’em all in a comment below.