Questions cut as deeply as scalpels in Thursday’s Grey’s Anatomy. While Meredith, Amelia and Kai at last operated on David, Richard challenged Levi to consider a different path, Teddy wondered whether her marriage to Owen was kaput, Bailey was forced to contemplate an unexpected opportunity, and Jo and Link pondered how they were going to do “this” without ever really coming to any understanding of what “this” was. On top of all that, yet another doctor was left trying to figure out how he was ever going to live down the unsolicited kiss that he gave. Who was it? And who was on the receiving end? Read on…

‘YOU JUST GOT AN OFFER TO GO TO SPACE?’ | Early on in “Legacy,” Bailey disclosed to her biggest fan Jordan that an old med-school friend had invited her to join them in working for NASA — a prospect made all the more appealing by Tom’s return to Grey Sloan to scrub in on David’s surgery. In other developments, Jo continued to avoid Link like the plague (but on the plus side, her hair was back to normal), and while Owen proved the old adage about doctors making the worst patients, Teddy got her day-drink on at Joe’s. When Jo ran into her there, they both decided to get sloshed. Teddy was tired of lying to her Leo and Allison that everything was A-OK and unsure whether she should’ve already called time of death on her marriage. For her part, Jo admitted that she not only had slept with but might be in love with Link. Oh, and their kids would simply have to understand that for the love of God, sometimes Mommy just needs a break and a screwdriver!

Though Nick had to miss Mer’s big day in the O.R. — send “doc pics,” he said, only realizing afterwards how it had sounded — it started off swimmingly. Grey even got the patient to agree to throw open the gallery to everyone in the hospital since it was one of the teaching variety. Before surgery, Kai demonstrated just what a terrible public speaker they are — “I chose research for a reason” — and Bailey and Jordan continued to bond over their adorkable passions. Only after the procedure was well underway did Amelia get paged to another O.R.: Owen was suffering from complications from his own recent surgery. She couldn’t go, of course. “It’s not like Shepherd’s sitting around doing Sudoku,” cracked Tom. But Amelia really wanted to run to her ex’s side — a shock to Kai. Finally, Mer reminded Amelia that all of their work would be for naught if she left the room, so Koracick, of all people, was dispatched to fix up Owen. 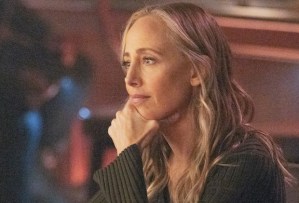 ‘WE ALL KILL PEOPLE’ | While all of this was going on, Richard paid a visit to Levi’s mom’s basement, where Schmitt was sacked out playing video games. Webber did his best to relate to the resident formerly known as Glasses, sharing the story of a patient to whom he’d felt close, one that he’d also lost. But Levi just turned up the volume on the TV. He liked the game, he later explained, because no matter how many times he died, he always got a do-over. He could begin again as someone altogether new. Well, he could do that in medicine, too, Richard argued. He could choose a new specialty, pursue research or teaching… Pass, said Levi. In his mind, he’d already “bled out. There’s nothing left to save.” In Minnesota, Nick made it a point to meet the parents of the boy whose death had provided the liver for the transplant he’d be performing that day. He then impressed upon his resident the importance of the donor. “You cannot forget the person who gave the gifts,” he said.

Following Owen’s procedure, Teddy, no doubt hungover as hell, was by his side. When Tom had called to tell her that her husband was undergoing surgery, it had reminded her of the poor decisions she’d made when she’d been triggered. Ah, but Owen wasn’t triggered, he said. He stood by his decision to help dying veterans end their lives — a stance that it appeared might also end his marriage. Following David’s groundbreaking surgery, Kai marveled that Amelia had even considered leaving the O.R. “Then it dawned on me,” they said. “You are someone who loves her people so hard and so much that the second they are in trouble, everything else just falls away.” Luckily for Amelia, Kai found that as inspiring as infuriating. At Jo’s, a chance encounter with a naked Link led to her kissing him… then pushing him away… then saying no, of course, she didn’t want him to move out… or maybe she did? 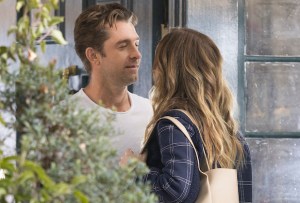 And in the episode’s final moments, as Mer showed up on Nick’s doorstep in Minnesota, Bailey told Jordan that no, she had turned down the job offer. He then made all kinds of Stars Wars references that I didn’t get to suggest that she was making a mistake and might be the chosen one. “The only bright spot around here lately,” she said, tickled, “has been you.” With that, he kissed her! Immediately, it became clear that no, sir, that had not been what that moment called for, and he left skid marks across the parking lot as he excused himself from the situation at warp speed.

So, did you see Jordan kissing Bailey coming? Do you imagine Teddy would really divorce Owen? And how badly do you wish Jo and Link would just communicate with one another, for Pete’s sake?