The Flash this week not-quite-raced back from a three-month break, skidding to a stop on a new night, now airing Wednesdays at 8/7c. Did the timeline-breaking adventures of Bart and Nora reel you right back in?

The first episode since the season-opening, 5-part “Armageddon” event picked up with Barry and Iris’ vow renewal at the close of last season, tacking on a bit of post-ceremony revelry (where Barry affirms that, per Gideon, Bart and Nora’s visit didn’t affect the timeline.) Bart and Nora bid their ‘rents adieu and speed back home to 2049, where everything seems copacetic… until a temporal wave sweeps through their apartment, erasing the late Uncle Jay’s speedster helmet on display, after which Jay himself walks through the front door with Big Belly Burger for everyone! Bart and Nora try to contain their confusion/glee at seeing Uncle Jay alive, then not-so-deftly attempt to feel him out about other possible changes to the timeline. (Barry and Iris are currently in Milan, celebrating the anniversary of their vow renewal, he says.)

Jay for no apparent reason recounts how he nearly died at Godspeed’s hands months ago, but Bart/Impulse saved the day and as such “will make a great Flash one day.” Jay then alludes to an Aunt Rose — aka his wife, further confusing the kids. Bart and Nora later visit the Flash Museum, where Nora speculates that something about how they chased Godspeed using the Cosmic Treadmill 🤷🏻‍♂️ caused “temporal fissures”/timeline variations. Among them: Jay never married Joan, who has now been erased from the timeline, and Joe got promoted to chief sooner than before. The two date the fissures back to Dec. 31, 2013, where Joe got shot during a jewelry heist — while Barry was still in his coma — and that set the “dominoes” in motion. As such, they reckon if they can save Joe from being shot during that heist, all will be right with the timeline. 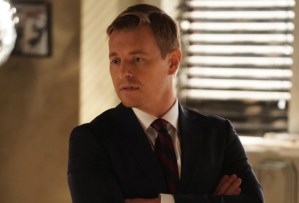 Bart and Nora arrive at the CCPD circa New Year’s Eve 2013, where they introduce themselves to Detective Eddie Thawne as interns. Making a coffee run at Eddie’s behest (so that he can win over his grumpy new partner, Joe West), Nora and an instantly smitten Bart meet Avery (Legacies‘ Piper Curda), a young woman studying theories of “impossible” time travel for Fast Track Labs. (Avery Ho, perhaps?) The kids then set out to keep Joe from getting shot, but an impulsive Bart moves Joe, not the bullet, which for some reason makes the time fissures sitch even worse. As they walk away, we realize that their conversation about “metahumans” is being overheard by Mona aka she who will become “Queen” of the Royal Flush Gang, which as a result winds up forming ahead of schedule.

Noting a new future headline about the Royal Flush Gang robbing a casino that night and killing dozens along the way, Bart and Nora set out to eliminate the body count, though as a looped-in Avery points out, they must let the heist itself happen. Though there was a close call or two at the world’s saddest, least populated and most brightly lit casino, Bart and Nora manage to save all of the lives, while letting a perplexed RFG pull off their robbery. Afterward, Bart bids a fond farewell to Avery, who pulls “McFly” into a big ol’ goodbye kiss. Bart and Nora then return to 2049, where they bring Uncle Jay up to speed on his undone death at Godspeed’s hand. Jay tells Bart there is no need to apologize, that speedsters will sometimes make mistakes that can’t be undone, “but you can always try to make things better,” as they did in 2013. He then leaves them with a well-played joke about having a meeting with “President Luthor.”

But Bart and Nora’s timeline-fixing work apparently is not done. Because as we return to the present-day West home, Iris, Frost, Joe, Cecile, Chester and Allegra are ready to be super-sped by Barry to Paris, to kick off 2022. But after they lightning-crackle away, we see the hairbrush that Iris had just been using fade away from existence…. 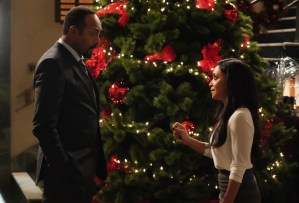 Elsewhere during the spring premiere:

* Joe West in 2013 tried to warm up to ADA Cecile Horton, but got shot down given her sour disposition so soon after her divorce. “Intern” Nora later suggested surprising Cecile with lilacs , which scores him enough favor for her to later indicate definite interest, once she is ready to date again.

* Yep, we got a Booster Gold sighting (as played on Legends by Donald Faison), as Nora and Bart skimmed archival newspaper headlines. 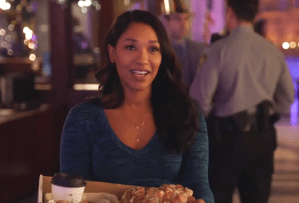 * At the CCPD, Iris aka Joe West’s “lovely daughter” recognized Eddie/Detective “Pretty Boy” as the one who helped save her dissertation.

* In that final West home scene, Frost indicates that she and Mark aka Chillblaine are still together, while MIA Caitlin herself has a new mystery beau named Marcus.