Snowfall director Damian Marcano wanted to show another side of strippers-turned-assassins Black Diamond and Dallas, so he explored them through motherhood.

The end result was an awkward-but-comical interaction in last week’s Episode 3 between the pair and Louie and Jerome, as Black Diamond and Dallas dropped off their children at elementary school. Louie told the women, who now work for Franklin, she would and could forgive them for nearly killing her if they used their exotic dancer connections to plant seeds of usurpation in Mello’s head.

The lady gangster boss even gave Dallas and Black Diamond’s kids lollipops as a gesture of good faith. But Christine Horn, who costars as Black Diamond, says the moments of levity in front of and behind the camera still make her chuckle — especially when it comes to Black Diamond’s artless apology to Louie.

“We had so many laughs in that moment,” Horn fondly recalls to TVLine. “We wanted Black Diamond to be as earnest as she could be, you know, because they’re all working together now. It was a hot mess. Let’s be real. What was she really saying? Black Diamond is the one with the brains and Dallas is the one to pop off first, but as women, they’re trying to be strong and wear all the hats, and sometimes that means not expressing themselves very well.” 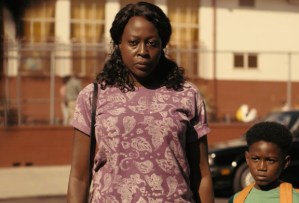 Horn shares that more than anything, she wanted her performance to convey remorse, as klutzy as it may have been.

“We did maybe four takes and everyone was laughing,” Horn reveals. “The director would say, ‘Try it again and mumble some more.’ And he let me ad lib a bit, so I chose to say it in a way that wasn’t so clear. It needed to be awkward, but if it were up to Jerome, Black Diamond and Dallas would be dead.”

Amin Joseph, who stars as Uncle Jerome, earned the biggest laughs in at least two takes that ended up on the cutting room floor, Horn divulges.

“When we ended Season 4, Franklin convinced Black Diamond and Dallas to work for him by saying if they did, they wouldn’t have to chase another dollar,” Horn explains. “So, for them, it’s always business, never personal.”

For Uncle Jerome, everything is personal. 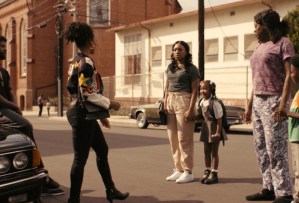 “Uncle Jerome is going to be Uncle Jerome and when Louie gave the kids lollipops, Amin stayed in character and snatched the lollipops away from them,” Horn recalls with a laugh. “Amin loves to ad lib and it was so in character. It was so fun to be a part of that. The running joke was, ‘Amin, don’t scare the kids.'”

Time will tell in Season 5 if Uncle Jerome, who coldly refers to Dallas and Black Diamond as “Thing 1 and Thing 2,” will become more or less menacing to the duo. Either way, Horn vows that Snowfall fans will be seeing a lot more of these working moms. When the show airs this Wednesday at 9/8c on FX, for instance, the two will be watching Franklin’s back in the projects.

“Our writer Jeanine Daniels helped us develop a backstory for Black Diamond and Dallas as former nurses, who turned to stripping for better money,” Horn shares. “When stripping wasn’t enough, they became hitwomen. They are not stupid eye candy. These women have a lot more going on, even if we don’t get to explore that on the show. They’re trying to have more for themselves and for their kids and this season, you’re going to see their jobs with Franklin expand.”

Are you rooting for or against Black Diamond and Dallas in Season 5? Why or why not? Drop your thoughts in the comments.