Harry’s trip to New York might not have given him the answers he was seeking, but what he did get was way more than he bargained for.

In Wednesday’s episode of Resident Alien, Harry and Asta continued their hunt for Goliath, only to discover that Harry’s fellow alien being was actually dead. Despite his longing for connection and the huge disappointment that faced him, Harry smashed Goliath’s stone carcass to pieces, finding an egg inside that was revealed to be an alien-human hybrid. After Violinda agreed to let Harry maintain possession of it, Harry and Asta headed back to Patience with a new life that could very well turn the entire town upside down.

So how will this egg-creature shake up Harry’s life and what lies ahead for next week’s midseason finale? Here, Alan Tudyk talks to TVLine to break it all down, plus details why the loss of Nathan Fillion’s 42 is “a good thing” for the show.

TVLINE | Harry on LSD was probably one of my favorite scenes of the season so far. How did you even wrap your brain around what an alien posing as a human, but tripping on psychedelics would look like?
ALAN TUDYK | That’s a good question! [Laughs] So the immediate problem — it affects him in a way that exposes his true identity, which fortunately for him is not a problem in Manhattan! Everybody sees him and thinks he’s in a costume… there are so many costumed people there.

I looked at studies of people on LSD in the ’60s and there’s this great one where they had an artist draw these series of pictures. First, he did a portrait of this bust he had, and it was very realistic. Then after an hour on LSD, he did another portrait of the bust, and it was a little bit more abstract. For the last one, he complained he was having problems holding his pen and that the ink was running out, and they noted he was using a red crayon. [Laughs] He was hallucinating things that were still in the realm of possibility even though they weren’t true in that moment. For Harry, he could’ve been Dune‘s sandworm, in an atmosphere that had a consistency of apple sauce. I didn’t go down those roads. I pretty much stayed in the world of the paranoia and fear that was in the script, but boy, I realize now, it could’ve gone so much worse!

TVLINE | Harry lost 42 in the episode prior, and now he learns that Goliath is dead. How would you describe his emotional state after suffering such major losses?
When the octopus dies, he’s definitely lonely because his cousin was the closest thing to an alien in Patience. But then afterward, Harry also experiences that feeling you get after a really good meal, so it’s really kind of good and bad. But he was really looking forward to meeting Goliath because he was truly from his planet. In the first season, Harry missed his home, but he had a way to get back. He just had to find his device and repair his ship. There was hope. Now that his ship has crashed thanks to Max — and not to point fingers, but… totally his fault! — this was his best chance to see someone from home again, and he gets as close to hopeless as he could get.

TVLINE | Harry smashes Goliath’s body and finds an egg inside. What does this mean for Harry, and will this lead to the connection he’s been longing for?
Children on his planet are very different from how we think of children. They’re like octopuses or seahorses. They have so many at once, then it’s an odds game of which ones are going to survive. For Harry, it gives him something to figure out. It’s a mystery. How did it even come about that Goliath was pregnant? It’s a human-alien hybrid. What does that even mean? There’s a lot of conflicting emotions that go with it. There’s the possibility of connection, but there was a point where scientists were trying to breed chimpanzees and humans, and I don’t think of “connection” when I think of the outcome of the man-zee. I think of horror and I don’t know, maybe a circus tent. [Laughs] 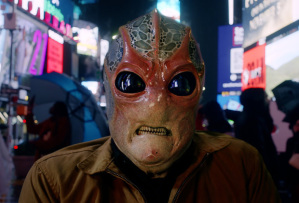 TVLINE | Two mysterious figures have been chasing Harry and Asta through New York, and we find out they’re from the Galvan/Powell Group. Any hints about when we might find out more about that organization?
Very soon! You will learn more about the Galvan/Powell Group within the first eight episodes, and the original Harry Vanderspeigle’s ties to them and what it means to cross them.

TVLINE | At the end of 207, Goliath’s egg cracks. What can you tease about next week’s Season 2, Part 1 finale?
It’s going to turn a lot of people’s worlds upside down! You’re doubling the population of aliens in Patience right there. Harry has definitely affected Patience, so the egg is going to have its own effects.

TVLINE | Circling back to Harry’s dearly departed squid, obviously you and Nathan [Fillion] go way back, but did it take much convincing to get him to lend his voice?
He loves the show and was on board immediately! He was a little down that he was off the show — it was less about convincing him to come on and more of convincing him that it was a good thing that his character had moved on. This show covers so much ground. Certain things could be teased out for seasons, but we cover them in a couple episodes sometimes, so it only makes sense that characters who have joined us later in the game could possibly disappear.

It reminds me of another show I liked very much, Firefly. You never know who could go! I think it’s just good TV when beloved characters, even those voiced by the great Nathan Fillion, are killed. I can’t imagine he’s ever going to get a better death than that scene — getting ragdolled by a dog, and as his last words, asking to be eaten by me. [Laughs] It was beautiful. The whole CPR scene… by the way, there’s a version of that death that is four times longer than what made it into the episode. Maybe one day it’ll end up on some extras somewhere.