The tape continues to haunt her, as she’s passed over for roles in L.A. Confidential and Austin Powers. Tommy assures her that the negative attention is gonna die down. But in the middle of the night, Nikki Sixx calls and walks him through the process of connecting to this unknown land called the internet. Tommy pulls up the webpage and strewn across the screen is… you guessed it!

Meanwhile, Rand’s been steadily working for Butchie, but he’s trying to get out from under the mobster’s thumb. Mr. Peraino tosses him a lifeline: If Rand can cough up $10K, Butchie will consider them square.

When Rand goes to shake down a dude that owns Butchie cash, he finds the sex tape playing on the guy’s computer. Seth Warshavsky, the head honcho from Internet Entertainment Group, found a way to stream the tape on a worldwide scale, and Rand is not happy. He calls and threatens to drive up to Seattle to “pop his head off like a f–king dandelion.” If only his car would start.

“The VHS tape, that was a flu,” the Lees’ lawyer tells them. “This is a plague.” Pam and Tommy sue Seth and his company, but a judge denies their injunction, since IEG isn’t charging money to view the video. The exec then makes the couple an offer for the rights to the tape, so he can actually sell it for profit. If he holds the rights, it would be illegal for other sites to upload it, which he argues would contain the tape to a far smaller amount of eyeballs. Tommy shuts him down, but on his way out, Seth leaves a contract and offer on the table.

Pamela wants the whole ordeal to be over. “Give it to him. Grant him the rights for free,” she says. “He doesn’t get to buy me.” 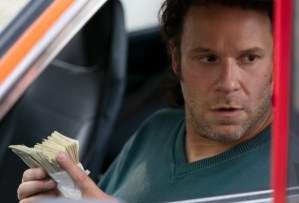 Rand visits Erica and asks for five minutes of her time. He wants to make amends, since he really did love her. She says they can stay in contact, and that he’s a good person who did some stupid things. Rand admits that he’s sorry. Lee screwed him over, but what did Pamela ever do to him?

Back at home, Tommy apologizes. “Sign it,” she says, handing him Seth’s contract. The rocker screams in anger, trashing his own house like a child. Then he signs. “It’s over,” Pam says, with a hint of relief.

IEG begins selling the video on their site for $29.95, as Rand pathetically apologizes to a woman cosplaying as Pam, red bathing suit and all, on the streets of Hollywood.

When Rand gets home, Seth is waiting for him. He wants Rand to sell him a better copy of the tape, and offers him $10,000 for it. Exactly the amount of cash Rand needs to pay off Butchie.

Pam and Tommy have their baby. Rand leaves Erica the $10K to cover their divorce, plus what he owes her. Meanwhile, VHS copies of the tape are now for sale in brick-and-mortar stores.

In the end, we’re told that Pam divorced Tommy in 1998, two months after Lee’s arrest. He pleaded no contest to felony spousal battery and was sentenced to six months in jail.

Seth sold the DVD rights to the tape to Vivid Entertainment for $15 million. The tape is estimated to have generated a total of $77 million. As for Rand, he moved to Northern California to become a marijuana grower. And no one believes him that he was the guy who stole the Pam and Tommy sex tape.

In 2008, Pam and Tommy reunited, but it didn’t last. Despite their rollercoaster of a relationship, Anderson and Lee have each called each other “the love of their life.”

So what did you think about Pam & Tommy‘s tale? Grade the finale and series overall, then drop some comments!