Superman & Lois closed one major chapter on Tuesday, then immediately flipped to an even more terrifying one.

Let’s start with the episode’s big loss: Bizarro is no more. Despite Superman and Tal-Rho teaming up like nice brothers to keep the pasty invader safe from Lt. Anderson, they were ultimately unable to prevent the juiced-up military man from choking Bizarro out in the fortress.

“Yeah, I felt bad!” director Elizabeth Henstridge tells TVLine of being the one to helm Bizarro’s swan song. “But what an amazing opportunity, what a cool thing to be given to do. I think Amy Jo Johnson did such a brilliant job [directing] 206 where we get to know him a bit more. I was sad, but this is also the sci-fi world, so you never know!”

As for Ian Bohen, whose character committed the dirty deed, he recalls not believing showrunner Todd Helbing upon first being told that Bizarro would die at Anderson’s hands.

“When Todd told me I was going to be the one to do it, I was like, ‘How the eff am I going to do that?'” Bohen says. “But as it was all revealed, we ended up with this incredible fight scene choreographed by Rob Hayter. I thought we did it in an awesome way. That was a very long, very satisfying day for Tyler [Hoechlin] and I to work together.”

Of the strangely heartbreaking moment, Henstridge says she drew inspiration from Bizarro’s death in the comics.

“He had blood coming out his eyes and his nose, and you can see that if you look very carefully,” she explains. “The Bizarro that I read in the comics was childlike. He had this innocence to him that was very endearing, so the positioning of him dying really dictated how we constructed the whole fight previous to that. We made sure that it ended with Anderson rolling Bizarro off, so he kind of goes into this fetal position. I had that image [in my head] as soon as I read the script. Max [Cunningham] and Michael [Narducci] are masters at their craft of writing; they’ve given us this massive fight sequence, and then we get this stillness. That made that moment land.” 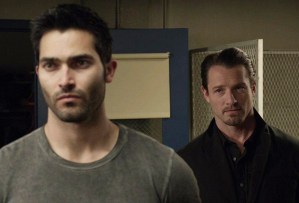 Of course, this on-screen death was a long time coming, according to Bohen. In fact, it’s been fated to happen since 2011. We’ll let him explain: “At the end of Season 1 of Teen Wolf, Tyler slashed my throat and killed me,” he says. “So now we’re back to being even, and we’ll see what happens next.”

Immediately following Bizarro’s brutal demise, Anderson snatched the guy’s pendant and brought it to the one person most likely to use it for evil: Ally Allston. Of that unlikely team-up, Bohen says that he and actress Rya Kihlstedt — with whom he appeared in several episodes of Yellowstone — had instant chemistry, from which they formed a “stilted and undefined relationship” for their characters. “There’s certainly a power struggle in terms of who’s in charge and who thinks they should be in charge,” he says.

Elsewhere in the hour: Lana returned her focus to the political arena, confronting Mayor Dean in public to remind everyone that he’s a total d-bag; Sarah felt uncomfortable consulting Jordan about her family drama, so she turned to her camp crush (gasp!) for advice; and Jonathan was caught with a bunch of Candice’s X-K vials at school, risking expulsion and — far worse — the wrath of Lois Lane.

Your thoughts on Bizarro’s death? The episode in general? Whatever’s on your mind, drop it in a comment below.

With additional reporting by Matt Mitovich