The residents of The Coterie will be facing some major relationship crossroads when Good Trouble returns for Season 4 this Wednesday (Freeform, 10/9c).

For starters, viewers will finally learn whether Davia chose to be with her best friend Dennis or fellow teacher Matt. “There’s definitely a decision made and sort of resolution,” Emma Hunton, who plays Davia, reassures TVLine. 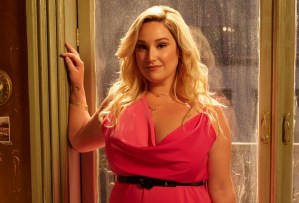 But there’s also something bigger at play for the blonde than just picking between two men. “The big theme for Davia in this season is finding her limits and boundaries, how to be there for someone and care for someone without taking on the weight of their trauma and making it her own,” Hunton shares. “I like to think of this season as a solid love relationship blooming with Davia and herself. That’s not to say that there aren’t romantic moments happening as well along with that, but to me, the best romance happening this season is Davia’s love and confidence in herself.”

Meanwhile, Malika is also in a romantic predicament of her own following her ex-boyfriend Isaac’s return. “I think we all have one or maybe a few of those lovers who really rock us to our core, and Isaac is definitely that for Malika,” her portrayer Zuri Adele says. “That was such a relationship that was really transformative for her. And his presence really shakes her up and gives her the opportunity to question how sure she is about the path she’s choosing,” which involves a polyamorous relationship with Dyonte and Angelica. 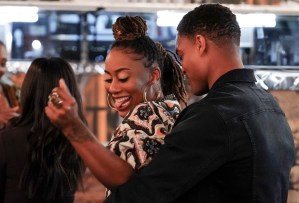 “It’s also an opportunity for Isaac to ask himself how flexible he is about the life that he wants. So we get to see that unfold in a really human, tender way,” Adele adds.

Then there’s Mariana, who ended last season in a tricky situation as a undercover employee at Bulk Beauty’s rival Revitalize Beauty, putting her back into her ex Evan’s orbit. “Goodness, this girl got herself into a pickle!” star Cierra Ramirez says with a laugh. “She’s going to be at a crossroads with these new girls and navigating that career and Revitalize and Bulk Beauty, and Evan always kind of being there on the sidelines.”

So does that proximity bode well for Mariana and her former beau reuniting? Or will The Coterie’s new tenant, investigative journalist Joaquin (played by Grand Hotel‘s Bryan Craig), catch her eye instead? “I always have a soft spot for Evan and Mariana. I feel like there’s such magic there,” Ramirez says, noting that “the show loves love triangles. So we’ll have to see how that all plays out. But I really do love the idea of Joaquin and Mariana. There’s some flirty energy there.”

Good Trouble fans, hit the comments with your hopes for the new season!