HBO’s Winning Time charts the rise of the L.A. Lakers to the NBA mountaintop in their 1980s glory days — but first, they have to start at the bottom.

Sunday’s premiere begins on a somber note: with Lakers superstar Magic Johnson leaving a doctor’s office in 1991, accompanied by an assistant who bursts into tears. Yep, that was when Magic was diagnosed with HIV, stunning the nation — but we’ll get there. First, we flash back to 1979, with Jerry Buss (John C. Reilly) rambling on about how basketball “is like great sex” to a naked girl at the Playboy Mansion. He’s a real estate tycoon getting ready to buy the Lakers, even though the NBA is plagued by controversy and lacking in fans. He makes a handshake deal with the current owner.. but he still has to come up with $15 million in a month to seal it.

So why does Buss think the Lakers are worth buying? Well, it helps that they have a chance to draft Magic (Quincy Isaiah), a spectacular basketball phenom who just beat Larry Bird in the NCAA title game. (To the media, Bird is “hardworking,” aka white, and Magic is “gifted,” aka Black.) We meet Magic at his working-class Michigan home, where his dad drives a garbage truck and his mom doesn’t like all the hype around her son. The Lakers win a coin flip with the Chicago Bulls, earning the #1 pick and the first shot at Magic. His mom wants to know if they even have churches in L.A., but Magic is more interested in the women there — even though he has a girlfriend named Cookie at home. She knows he has a wandering eye, and she breaks up with him before he even leaves town. 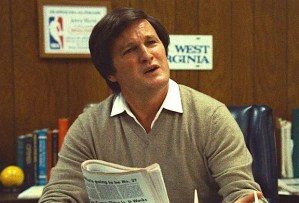 Magic’s future in L.A. might not be so certain, though: The Lakers’ cranky coach Jerry West (Jason Clarke) isn’t sold on the flashy point guard — he thinks he’s too tall to be a ball-handler — and we get a crash course in West’s own Lakers career as a great player who always came up short to the hated Boston Celtics. Plus, the team already has a point guard in Norm Nixon (played by Norm’s real-life son DeVaughn Nixon), and he’s not ready to give up his starting spot yet. They already have a superstar, too, in Kareem Abdul-Jabbar (Solomon Hughes), and he’s not exactly the warm and friendly type. (After he shoots his iconic Airplane! cameo, he tells his kid costar to “f–k off.”)

Buss doesn’t own the Lakers just yet, so he and the current owner welcome Magic and his dad to the Forum, where the team plays. Buss connects with Magic’s dad by recalling his own blue-collar roots, and when Magic balks at the fancy food, Buss fetches him a cheeseburger. Magic plays hardball, demanding a $600,000 salary (which was huge at the time) or he’ll go back to school. The owner holds firm — and calls Magic “boy,” ouch — and his dad urges him to take a lower offer, but Buss is on Magic’s side. He takes him out to a hip nightclub and introduces him to some lovely ladies before the emcee announces, “It’s showtime!” (Hey, that has a ring to it.) 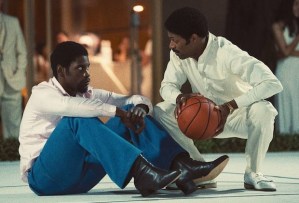 West is pushing for them to draft Sidney Moncrief (he’s a more reliable scorer, he insists), but Buss has his heart set on Magic. He brings Magic to a swanky party where champagne and cocaine are flowing, and Norm Nixon decides to humble the young star, showing him up on the basketball court in front of a crowd outside. The humiliation leads Magic to consider returning home for another year of college — and to make matters worse, the old owner wants to squeeze Buss on the sale, now demanding the full amount in cash. Buss declares himself “dead in the water,” but he always has a trick up his sleeve: He reminds the old owner that he’s going through a nasty divorce and needs this deal to go through a lot more than Buss does. (Accounting whiz Claire Rothman, played by Gaby Hoffmann, fed him the inside info.)

Magic drops a bombshell on Buss, though: He’s going back to school. Buss accepts his decision — but he also walks Magic out through the halls of the Forum, letting him see photos of all the Laker greats and a locker with his #32 jersey already in it. By the time he hits the court to shoot a few hoops, he’s changed his mind. The Lakers officially draft him, giving him a $500,000 salary, and at his introductory press conference, Magic promises “it’s going to be exciting.”

Give the Winning Time premiere a grade in our poll, and then hit the comments to share your first impressions.