When The Flash resumes Season 8 after a three-month break, there is more to remember than the fact that the CW series is moving to a new night (Wednesdays, at 8/7c) for the first time ever.

Because having screened this season’s sixth episode — and been wildly confused by it for the first five minutes or so — I think it prudent to share a little ProTip before you lay eyes on it yourself. (But then again, I am an “old,” and your memory may be sharper than mine!)

When last we tuned into The Flash, the “five-part Armageddon” arc had closed with Barry & Co. celebrating a big win, having restored the timeline that Reverse-Flash had futzed with in a way that cast him as Central City’s hero come 2031. Episode 5’s “stinger” involved a framed photo on the wall of the CCPD, which changed to reveal Bart and Nora in the background of a group photo taken Dec. 31, 2014.

What’s important to know as you fire up Episode 6, which is titled “Impulsive Excessive Disorder” (heh, wordplay), is that it actually picks up where Season 7 ended, with Barry and Iris’ vow renewal. We get a bit more of the aprés-ceremony celebration, before Bart and Nora speed back to their home in 2049.

Now, this is where things might get confusing, because eight very long months ago, it was mentioned on The Flash that “Uncle Jay” Garrick was dead in 2049, killed by Godspeed as Bart watched. Godspeed thus became Bart’s own arch nemesis a la his father and Reverse-Flash. That tragic event from Bart’s past — as well as the fact that Jay had married Speed Force Nora lookalike Dr. Joan Williams — plays a big role in Wednesday night’s 2049 scenes, so short of sitting yourself down for a Season 7 finale rewatch, it’s helpful to have those facts freshly re-loaded into your noggin.

So again: Jay Garrick is alive in the present (and in fact helped Team Flash been the Godspeed army in the Season 7 finale), but he has died by the year 2049. 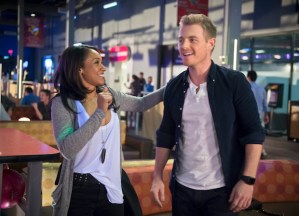 A few other blasts from The Flash‘s past worth re-remembering, heading into Episode 8×06:

* Though Cecile Horton was a DA in Central City, she didn’t first appear on-screen until late in Season 1.

And one fun fact:

* Keep your eyes peeled for a character that was just introduced on Legends of Tomorrow!