Demons of the literal and figurative variety plague Courteney Cox’s Pat during Shining Vale‘s two-episode premiere — but strangely, it’s the metaphorical ones that appear to be wreaking more havoc.

In the wake of Pat’s fling with the handyman, she and Terry have moved their family from Brooklyn to Shining Vale, Conn., in hopes of finding a fresh start there. Instead, they find that the house they bought for well under asking price (in this market?!) is an enormous, rather creepy Victorian mansion. And though Pat hopes to use the house’s sizable attic as an effective writing space for her next novel — if she doesn’t turn in a chapter to her editor soon, she’ll have to give back the advance — there’s frankly way too much weird nonsense going on in her new home for Pat to concentrate.

For instance, as the Phelps drive up to their Connecticut residence for the first time, Pat thinks she sees a young girl running into the road to chase her ball, but there’s no one underneath or around the car when she asks Terry to stop and check. She (maybe?) hallucinates a woman dressed in circa-1950s clothing hovering outside one of the mansion’s windows that night, but again, Terry finds nothing upon investigating. On one occasion, she hears the ghostly whisper of her own name, which prompts Pat to worry that she’s headed for psychosis, just like her mother. And perhaps most worrying is the eerie presence of another Shining Vale resident who looks terrified every time Pat encounters her. “I sense something. It wants you. Please be careful,” the woman attempts to warn Pat, but Pat can hardly hear her from across the street. (All this, of course, as Pat is trying to repair her intimacy-free marriage and ward off crippling depression.) 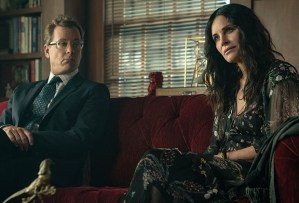 It might be best for Pat to get within earshot of her neighbor’s advice, though. Near the end of the first episode, Pat is once again in the attic, attempting to write a chapter of Cressida: Rebound. “Please,” Pat whispers at her laptop, hoping for sudden inspiration — and just then, the lights flicker, a breeze blows, and Pat’s pupils suddenly get wide. She starts typing frantically, like she’s a woman possessed, and continues her super-focused writing spree for hours until it’s dark outside. And when Pat comes downstairs for dinner with her family later, she’s acting a tad odd at first, but she, Terry and the kids ultimately have a pleasant evening together.

That night, Pat is woken up by someone calling her name again. She goes outside with the family dog Roxie, who’s barking and growling, but Pat is relieved to find it actually is a deer this time, as Terry’s been suggesting all episode long anytime Pat sees or hears something strange. Then, back inside the house, Pat opens the curtains to the window where she’d seen that woman hovering earlier; no one’s there this time, and she’s even more relieved.

But when Pat turns around, that woman — played by Mira Sorvino — is now inside the house, and she’s looking right at Pat. “Patricia, what are you doing in my house?” the woman asks, and a petrified Pat weakly calls out to Terry for help. (In Episode 2, Pat encounters that same spirit three more times, each one a little less frightening than the last. I suspect they’ll be besties any day now.)

OK, your turn. What did you think of Shining Vale‘s first two episodes? Grade them below, then drop a comment with your full reviews of the premiere!