Eve has been keeping her distance from Villanelle this season on Killing Eve… but she could be getting dangerously close to another lethal woman. 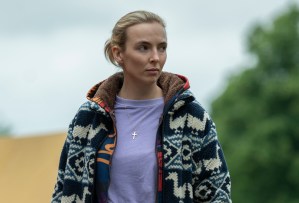 Sunday’s episode found Villanelle getting back to her murderous ways, stabbing her new friend May and her dad to death with a tent spike after she overheard them calling her “the devil.” (Guess that visit from Jesus didn’t help much.) Meanwhile, Eve tracked down The Twelve operative Hélène at her home in Paris, where Eve offered to cook her up some shepherd’s pie (!). When Eve cut her hand on a knife, Hélène sucked the blood and then held Eve’s hand against a stove burner and turned it on, demanding to know what she’s after. Eve walked away with a slightly singed hand — and the knowledge that Hélène wants to bring down The Twelve as much as she does.

The kitchen scene felt like a direct echo of Eve’s tense encounters with Villanelle in seasons past. So does Hélène push the same buttons in Eve that Villanelle used to? “I don’t think so,” star Sandra Oh tells TVLine. “There’s nothing that replaces or can possibly replace Villanelle to Eve, But you have an exercise and a power play between Eve and Hélène.”

Going forward in the final season, she teases, “you see how Eve manages that, and Villanelle is really used as a pawn, to hurt one another.”

Got thoughts on this week’s Killing Eve? Share ’em in the comments.