As fans of CBS’ The Equalizer know, this is not a series that shies away from controversial topics. So it only makes sense that the drama would have Robyn McCall (played by Queen Latifah) take on a client trying to solve an Asian hate crime, after an innocent bakery owner is found dead.

The episode, which airs this Sunday at 8/7c, not only spotlights the disturbing increase of anti-Asian hate and violence in America, particularly in New York, but relied on anecdotal stories from cast member Liza Lapira‘s life, and that of her family and friends.

“I loved the process from the beginning to the end,” Lapira, who plays Mel, tells TVLine. “From jump, there was a lot of transparency and it felt like an invitation in a real way to be involved from the ground up. I felt like the way it was written was so emotionally intelligent. It frankly made me excited to tell stories in the future. Not just on The Equalizer but on other shows.

“Until the rooms get more diverse and as things like this happen, writers need to reach out to more communities,” she notes. “This is the template for the way to do it, because I felt like it made for a truthful and entertaining end product.”

Zoe Robyn penned the installment, titled “Chinatown,” with Lapira’s input and personal knowledge. She says although the writers’ room doesn’t have any Asian American writers, staffers did everything they could to make the script ring true.

“We do a lot of research on every episode that we write and every issue that we tackle,” Robyn explains. “We really wanted it to come from the character’s point of view and wanted to dig into Mel’s character. I called Liza even before we had started writing because we really wanted to delve into the personal. We wanted to get some perspective.” 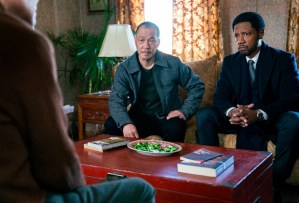 Robyn says viewers will be able to feel this level of authenticity when the installment airs.

“Liza was so generous in sharing her stories, and a lot of them made it into the episode in different ways and had a huge impact on the storytelling,” Robyn avows. “The story is also a lot more grounded than taking something from the news cycle. It’s one thing to do research and do your homework, and it’s another to have someone willing to open up and share her own lived experience. It made for a much richer episode and made the on-screen representation much more impactful.”

Best of all, Lapira says that she was able to honor people from her community who mean a lot to her.

“It was a much more collaborative and representative experience of the macro by way of my micro,” Lapira observes. “I was able to uplift three very important seniors in my life, and I was able to talk about them with specificity, and I am so proud they made it into some of the characters you’ll see on the show. I was able to give voice to real people, and Zoe was able to synthesize and flesh that out.”

The episode’s narrative thread on bystanders and onlookers doing more than recording incidents on their phones or turning a blind eye also plays a prominent role in the hour, which means a lot to Lapira.

“When you’re a member of any targeted group, there can be 100 people around you and if no one helps you or calls the police, you feel alone and you are alone. And that’s wrong and devastating for everyone,” the actress passionately expounds. “The way it’s put into the show is brilliantly done and part of The Equalizer as a whole. This is a show about being brave enough to do something or say something, and that’s what we’re doing.”

Are you looking forward to Robyn, Mel, Harry and Dante tackling anti-Asian hate? Or do you think the topic is too heavy for this series? Drop your thoughts in the comments.