What is The Endgame for the enigmatic and clearly brilliant Elena Federova?

Thus far on NBC’s freshman mystery-thriller airing Mondays at 10/9c), Morena Baccarin‘s criminal mastermind has vexed FBI Agent Val Turner (played by First Wives Club‘s Ryan Michelle Bathé) and her G-man colleagues, as well as those of us watching at home. To date, Elena has orchestrated the robbing or hijacking of no fewer than seven New York City banks (in keeping with some “Snow White” theme) — and exposed the secrets of some government stooges along the way — all whilst calmly cooling her heels in a cell in Queens’ Fort Totten. 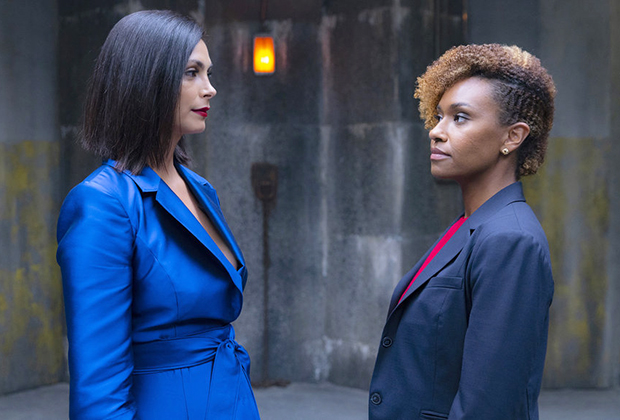 Flashbacks have revealed how Elena’s years-ago wedding to Sergey (Costa Ronin) took a tragically explosive turn, while in the present day, viewers are wise to the fact that her “dead” husband is not just alive, but in cahoots in prison with Val’s own better half, Owen (Kamal Angelo Bolden).

What is Elena’s grand plan, and what Achilles heel might come into play and threaten to topple her elaborate house of cards? TVLine spoke with Baccarin about what has happened and what is to come, as well as asked the Gotham grad about her plans to meet the big screen’s latest Batman.

TVLINE | This is such a meal of a role. How quickly did you say yes when you saw the script?
[Laughs] Well, I like to do my due diligence, but yes, it was pretty much a no-brainer. It was a great part with a great creative team behind it. And so much fun to play.

TVLINE | Did you have any concerns?
Well, I wanted to make sure that creatively, it was going somewhere, and it wasn’t just a procedural with a formula…. But [showrunner Nicholas Wootton and the other EPs] have a great plan for this part and character, long-term as well. I also really wanted to know if [my interest in collaborating] was reciprocated, if they were open to having ideas by me, and open to really allowing me to create this incredible person. 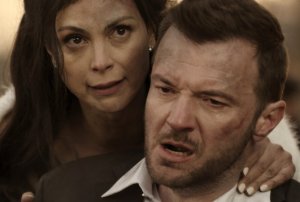 TVLINE | Elena keeps saying things to the effect of “I’m not the bad guy,” and in next week’s episode, she in fact tells all of New York City, “You’re going to love me by the end of the day!” Around what episode might we, the viewers, start seeing her as some version of good?
I think by Episode 3. By [Episode] 2, you can sympathize, given what’s happened [on her and Sergey’s wedding day] and you start to get a real idea of why she’s doing exactly what she’s doing. But now that the photo has been introduced, I think that by the third [episode], people will be on her side — but a little confused about it!

TVLINE | The whole Sergei thing is interesting, especially now that we know for certain that Elena knows he’s alive, as well. What for her is the value in keeping his “being alive” a secret?
Well, he’s got “the key to the lock.” What he’s planning in prison with Owen is sort of the crux of the season and will lead us to the very end. So, if Val finds out too soon what that plan is, or what’s going on, the house of cards won’t crumble as they should. 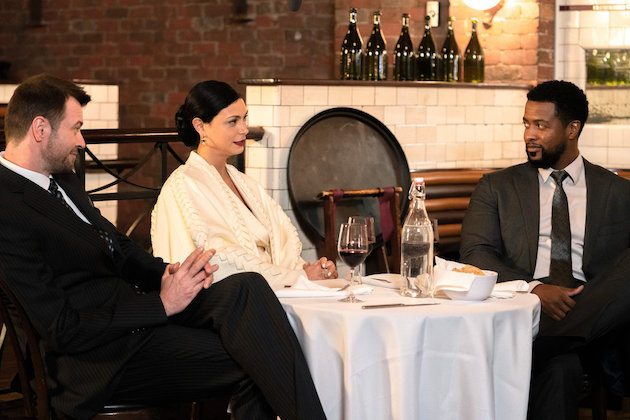 TVLINE | What can you say about the context of that photo we’ve seen, of Elena and Sergei with Owen? What will we learn about that this week?
So, you’ll see exactly how they met. There’s a very important business deal that goes on between them, that goes wrong, and you see how that relationship was solidified — and that Valerie doesn’t know a lot about that situation. And as it goes on and on, and more and more things happen to Val, she’s like, “How the f–k is this person doing this?”

TVLINE | Seriously. It’s like a Swiss watch. Yet I was thinking that if Val had been hit with that shrapnel from the bomb strapped to the kid, the series would be over.
It’d be over! [Laughs] Yeah, but she knew how to crack the code. It was very personal.

TVLINE | Now confirm for me — is Elena Ukrainian?
You know, that’s a really good question. She was, originally. The U.S. had a hand in the bombings that went on at her wedding, which you’ll come to see, but because of what’s going on in the world, we obviously didn’t want to put that out there, any version of that. So right now, we’re saying she’s “Belarusian and Ukrainian,” but it’s a little fluid what part of Eastern Europe she’s from. But her family is Ukrainian.

TVLINE | As we watch these episodes unfold, Elena is always six steps ahead of everybody. Will there be a moment when we get a first, clear slip-up on her part?
There’s definitely an Achilles heel. It’s her daughter (played by child actress Paisley Day Herrera), and you will see things get a little tense when she feels that her daughter could potentially be in danger. 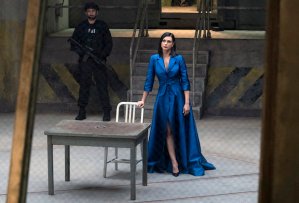 TVLINE | Elena was so happy to get out of her blue gown. What about Morena?
Morena was, too. I love that dress, but… it is not easy to wear for a long day.

TVLINE | It was like instantly iconic.
I know. It’s amazing.

TVLINE | Will we ever see Elena outside of Fort Totten? I mean, they built you a nice set there, but…
Yes. I know. It gets old. I’m happy for the flashbacks, but you do also see her in the present day, out of there. By the way, Gotham actually filmed some scenes at the real Fort Totten.

TVLINE | At the end of this season’s 10 episodes, are we going to have a good sense of closure?
Yes. I haven’t read episode 10 yet, but from what I understand, the targets are hit, the story gets wrapped up, but then it also plants the seeds for another season — should we be so lucky.

TVLINE | Right now, after two episodes, is there any way that we the viewer could predict Elena’s ultimate end game?
No way. No way. You’ll never know. 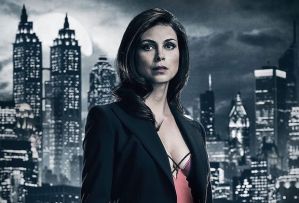 TVLINE | How quickly are you going to run out to see The Batman? Or have you had your fill of the Caped Crusader?
It’s just oversaturation at this point, I feel like. You know? But also to me, I’m a true fan of Michael Keaton and Michelle Pfeiffer in [Batman Returns]. I don’t know if you can ever outdo that. Not to speak ill of the new one — I haven’t seen it and I’m sure it’s great — but [Batman Returns] has a special place in my heart.

Want scoop on The Endgame, or for any other show? Email InsideLine@tvline.com and your question may be answered via Matt’s Inside Line.