I have to tell you right up front: I may be too biased to do a fair review here. You see, I grew up an L.A. Lakers fan, smack dab in the middle of the “Showtime” era depicted in HBO’s new docudrama Winning Time (debuting this Sunday at 9/8c; I’ve seen the first four episodes). This is the team that made me fall in love with basketball, and to Winning Time‘s credit, it actually manages to capture the joy and exhilaration of watching those great Laker teams. Yes, it’s significantly overstuffed and surprisingly crude, and I do wonder if non-sports fans will get into it, but for me, it’s a hell of a fun ride. (A lot more fun than watching the current Lakers season, I can tell you that.)

It’s hard to remember now, after all the championships, but the Lakers were lovable losers once, always coming up short to their hated rivals the Boston Celtics. Winning Time picks up in the late ’70s, with flashy new team owner Jerry Buss determined to turn the Lakers into winners, and into a box office attraction as well. As played by John C. Reilly here, Buss is a cocky sleazeball, all chest hair and gold medallions, with a bevy of women on his arm. His top-to-bottom makeover of the Lakers, starting with the drafting of superstar Magic Johnson, turns into a classic sports story, with a ragtag band of misfits coming together to win it all, claiming five NBA titles in the ’80s — and, along with Larry Bird’s Celtics, injecting new life into a struggling league that was in serious danger of folding altogether. 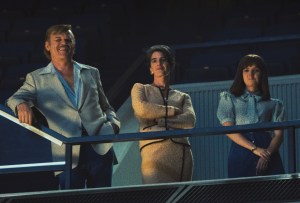 Winning Time feels like a freewheeling party from that era: breezily paced, with lots of laughs and characters breaking the fourth wall to directly address the camera. (Adam McKay is an executive producer and directs the pilot, and the show’s style recalls his financial crisis explainer The Big Short.) The tone is decidedly old-fashioned, too, with gratuitous nudity and off-color humor that’s straight from the swinging ’70s. The visuals follow suit, with grainy 16-millimeter footage spliced into scenes alongside crisp HD images to create a vintage vibe. Plus, the funk soundtrack practically struts, with dramatic scenes scored by a moody synthesizer.

The basketball scenes crackle with kinetic energy as the Lakers adopt a fast-paced, run-and-gun style of play that revolutionizes the game. But the action here mostly takes place off the court. (We don’t actually see the Lakers play until the fourth episode.) Winning Time really gets into the weeds of basketball strategy and front office moves, painstakingly showing how a great team is built. It also dips its toes into salacious waters, shining a light on the rampant sex, drugs and fighting that accompanied the Lakers’ rise. (With sexy Laker Girls dancers and celebrities sitting courtside, Buss aimed to make Lakers games into a cross between Disneyland, the Playboy Mansion and the Oscars.) But it bites off more than it can chew by taking on too many characters. We follow more than a dozen characters through a flurry of flashbacks and strange psychological detours, explaining how this parade of damaged men came to be so damaged. (It’s ten episodes, but it could’ve easily be six, or even four.) Its dynamic style and the intriguing personalities involved help it rise above all of that, though. 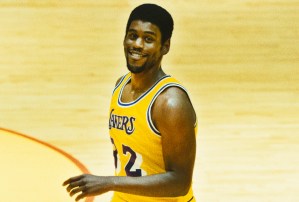 Reilly is terrific as Buss, gliding through L.A. like a king while also letting us know that underneath all the flash, he’s a formidable businessman. (McKay was absolutely right to cast him over Will Ferrell, by the way.) It’s almost impossible to find someone as effervescent as the real Magic Johnson, but newcomer Quincy Isaiah comes damn close — he’s got the smile and the swagger. And there are great actors in small roles all over the place here: Michael Chiklis as legendary Celtics executive Red Auerbach, Sally Field as Jerry Buss’ skeptical mother, Tracy Letts as hard-ass coach Jack McKinney. Even when the sheer number of characters becomes overwhelming, the actors make it work with sharply observed performances.

So will a sports novice enjoy Winning Time? I can’t say for sure. I can see basketball junkies devouring this like they did ESPN’s recent Chicago Bulls doc The Last Dance, as a meaty slice of a bygone era in the NBA, but all the hoops jargon could be a turn-off for non-fans. The drama here goes beyond the basketball court, though, showing how fresh thinking can revitalize an industry. And those Laker teams were famous for putting on a show and turning skeptics into fans, so maybe Winning Time can do the same on TV. When it’s hitting on all cylinders, it feels just like watching those ’80s Lakers run up and down the court — and that’s the highest compliment I can give it.

THE TVLINE BOTTOM LINE: Sports fans will have a ball with HBO’s Winning Time, a wild, crude chronicle of the L.A. Lakers’ rise to NBA dominance.