If the Biange blossom peeking through a San Francisco sidewalk at the end of Kung Fu‘s first season is any indication, we’ve only scratched the surface of the magical lore in the CW series.

Season 2, premiering next Wednesday at 9/8c, will expand upon those mystical elements as Nicky continues to protect Chinatown with her impressive kung fu skills. After avenging Pei-Ling’s death, watching Zhilan carted away to prison and her family accepting her heroic status, she starts the new season in a great place.

New episodes pick up six months after the events of the finale, with Nicky and Henry deep in love and the Shen family’s restaurant Harmony Dumplings thriving. But that peace will soon be interrupted with the reemergence of billionaire Russell Tan, whose sinister plans somehow involve Nicky’s long-lost cousin, Mia (Vanessa Yao). 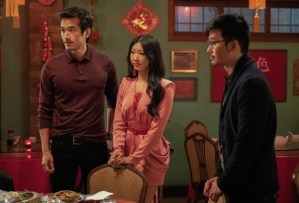 With help from Henry, Althea, Ryan, Evan and Dennis, Nicky will go up against the Tan family  — which includes Juliette Tan (Annie Q), the clever and conniving daughter of the nefarious business mogul —  and become a shifu in her own right.

Now that Nicky has really owned her power, she will “start to step into a different role of being a shifu like Pei-Ling was to her,” Liang teases. “What we’ll see Nikki deal with is trying to find the balance between how she wants to do things and how she feels things are right, but then maybe that’s not translating to Mia. [She’s] having to figure out how to be a mentor.”

Things may not go as planned for the warrior part of Nicky’s life in Season 2, but at least her relationship with Henry is holding up well.

“They make such a good partnership,” Liang shares. “Henry is such a supportive boyfriend, and he’s also very handy. You’ll see them on more adventures this season and working really well together. Henry gets a really awesome storyline about his family history, especially in San Francisco, that ties in seamlessly with their mission.”

As the show leans into more of the mystical lore, action-packed sequences and close-knit family dynamics, Liang notes that new episodes will also explore stories that are reflective of a diverse Asian community.

“Our writers have leaned into things that we as a show are uniquely able to talk about being a predominantly Asian cast,” she says. “They’ve definitely mined a lot of rich story out of what it means to be in an Asian community, to be part of San Francisco.”

Among those upcoming stories is one centered on Sebastian (JB Tadena), Harmony Dumplings’ charming new chef who catches Ryan’s eye.

“[JB is] Filipino, and he represents another part of the Asian community,” Liang adds. “His character’s introduction opens up the world for us, to more Asian American identities, so I’m very excited for us to go down that path.”