What if everything you thought you knew about your life was a lie?

That’s exactly what happens to 30-year-old Andy Oliver (The Man in the High Castle‘s Bella Heathcote) in Netflix’s upcoming thriller Pieces of Her (which drops all eight episodes Friday, March 4).

Based on the novel of the same name by Karin Slaughter, the series tells the story of Andy and her mother Laura (Unbelievable‘s Toni Collette) after the women survive a terrifying near-death experience at a small-town Georgia diner. When the media grasps hold of the situation, it sets off a chain of unexpected events, causing Andy to make a dangerous late-night escape from town. Hungry for answers about her mom’s mysterious past, she soon unearths shocking secrets that shatter her entire existence.

But even before all of the trauma, violence and chasing sets in, the relationship between mother and daughter isn’t exactly what one would call picture perfect.

“It’s a bit tense, a bit disconnected,” Collette tells TVLine. “My character spends her entire life trying to protect Andy from all kinds of truths, and that doesn’t work for anybody. You can’t do that in life! Andy suffers from that. She has low self-esteem. She’s disenchanted with life and can’t connect properly. We go to this diner, and I’m trying to draw her out and let her know that I’m there for her, and she’s just so dismissive. Then something much bigger and heavier happens, and we’re forced into something else.”

The media attention turns the women’s lives upside down, and shortly after, Andy’s alone and on the run, questioning everything she ever knew about her mom and their life together. As a result, the connection between the two “changes and changes and changes again,” says Heathcote. 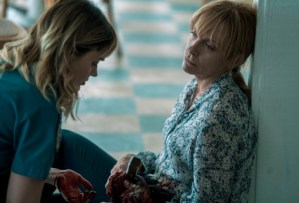 “You’re only as sick as your secrets,” she says. “The revelations that take place and the nature at which they come at her… Andy’s barely had time to process one truth before something else is revealed.”

Following their shared traumatic experience, Laura quickly decouples from her daughter for specific reasons that are slowly revealed over time. But to say anything further would veer far too close to spoiler territory.

“Once she’s been broadly exposed and Laura’s face is everywhere, she knows that her past is going to come knocking on her door, so she tries to push her daughter away,” says Collette. “She’s trying to save her. It’s a bit of panic and protection. She’s built a house of cards and it’s starting to shake. She’s trying to keep it upright, but it’s all going to fall down.”