If you told me I’d be spending my Thursday night hoping for a werewolf and a demigod to kiss, I’d say, “Yeah, that’s my job.”

While Thursday’s Legacies didn’t pull the trigger on a Jed/Ben lip-lock (yet!), it did address the obvious chemistry fans noticed between them last week. And because patience is highly overrated, Jed’s journey of discovery received a gentle push from a healthy dose of truth weed, which caused him to reveal feelings for Ben that even he hasn’t quite sorted out.

While Jed initially bent over backwards to make sure that Ben’s first official day at the Salvatore School went off without a hitch, he changed his tune as soon as the truth weed hit. (That’s how you know it’s the good s–t.) “I’m afraid I’m going to say something stupid, like I don’t want to be around you,” Jed told him. “I just want to be alone.” But as anyone with eyes, ears and a heart could tell you, Jed didn’t really want to be alone. He just wasn’t ready to face his truth.

Finch was, of course, the perfect person to track down Jed and scold him for ghosting his new “friend.” But when she asked why Jed was avoiding him, he honestly couldn’t answer. “It’s all jumbled and confusing,” he explained. “And I feel this pressure, like I’m going to say the wrong thing to him.” (At this point, you’d have to be devoid of a pulse not to realize what Jed was finally discovering about himself.) Unfortunately, Jed’s a-ha moment was interrupted by Cleo, who just had her inspiration stolen by none other than Aurora.

After discovering Ben in the woods, where Aurora forced him to tell her about the gods, Jed’s feelings became a lot more clear. “I was having all these feelings that were confusing,” he told Finch. “It didn’t make sense until we thought he was in danger.” (Ok…) “Then I understood.” (Getting there…) “I think I like him.” (Bingo!) And just like that, Jed finally figured out what the rest of us have known all week. And I love that he’ll have Finch to guide him on this journey.

Then again, if Aurora successfully wakes up the very sleepy — and presumably very cranky — gods, it’s not going to end well for anyone.

* Jed wasn’t the only character who had a coming out of sorts this week. MG and Kaleb dropped by Ethan’s family’s new house, responding to reports that the place might be haunted. What neither Sheriff Mac nor Maya knew was that Ethan was the alleged ghost in question; he hadn’t told them about his new powers yet. MG encouraged Ethan to come clean, delivering the perfect advice for his situation: “Wherever there’s love, there’s grace. So give them a chance. They love you. They might accept you for who you are. And if they don’t, I’ll be your family until they do.” I loved Maya’s response (“It’s still freakin’ weird, but he’s my brother either way”), and I love that she asked the guys to say hi to Finch for her. I totally forgot those two were a thing! 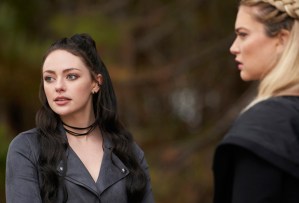 * It was anything but fun and games for Hope and Lizzie this week, despite the duo spending the entire hour at an actual carnival. During a test of Lizzie’s potential as Hope’s new sidekick, they encountered a little girl whose sister was taken by the (spoiler alert!) evil vampires running the entire operation. Lizzie’s desire to save the girl’s sister caused her to immediately fail the test, thus freeing her from Hope’s quest. But the minute Hope sensed that Lizzie was in danger, she rushed to her side, resulting in a phenomenal double act between the sire and siree. Well, it wasn’t phenomenal for the evil carny vampire who got cut in half… but for everybody else? Phenomenal.

Hope’s opinion of Lizzie also did a 180 after seeing how the new heretic handled the little girl. “It’s OK to miss her and feel sad, because you’re also going to feel something else,” Lizzie said. “You’re going to feel your sister beside you, no matter what.” Hope could see that she underestimated Lizzie’s strength, though Lizzie did make her promise not to break the sire bond after they kill Aurora. She’s not sure she’s ready to face the world without it. And I don’t blame her.