Romantic relationships are hard enough without people giving their unsolicited advice. But this is what Zoey had to contend with on Freeform’s grown-ish this Thursday.

In addition to her nosy but well-intentioned girlfriends, Zoey also got harassed by her younger sister Diane, who was visiting along with Jack to shoot footage of Zoey for a school project. Along the way, Diane commented on the awkward tension between Zoey and Luca, and Zoey admitted things were maladroit because they had kissed a couple of nights earlier.

Diane thought this meant Zoey had cheated on Aaron, but her big sister explained Aaron had broken up with her and Luca is just a friend and internship colleague. Nomi, Jazz and Ana also questioned Luca and Zoey’s platonic bond and wondered if he isn’t in fact her soulmate. Zoey disagreed and admitted they are soulmates creatively and artistically, but not romantically. 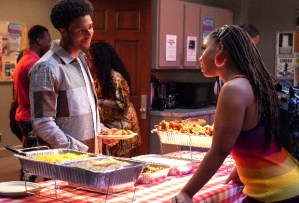 On the other side of campus, Luca also wondered if Zoey was his soulmate as he thought about the kiss. His younger sibling Kiela teased him about the smooch, and Luca returned the favor when Kiela gave Doug a hard time about seeing and helping out his ex-girlfriend Jazz.

Doug assured Kiela that he and Jazz are just friends. However, when Jazz visited him later that night at the chicken and waffle study dinner, Kiela saw the sparks between them and walked away brokenhearted. Luca experienced a similar feeling of rejection when Zoey met up with him and they celebrated Anti Muse’s first client, Tyler, the Creator.

Zoey told Luca she loved having him as a creative soulmate, but didn’t want to pursue a romantic relationship with him. Luca gave Zoey the most neutral hug he could and added that he’d always care for Zoey, even if they couldn’t be more than friends and fashion collaborators. 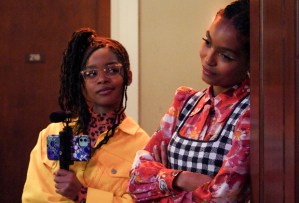 Later, when Zoey and Diane stopped by the chicken and waffle gathering, they overheard Aaron explain to Jack that he still loves Zoey, but had broken up with her to become the man she deserved.

The revelation warmed Zoey’s heart, and just before bed, she admitted to Diane that Aaron is her soulmate and she still loves him, too. This is not what Diane wanted to hear, and she vowed — somewhat playfully — to steal Aaron away because she has a crush on him. Diane is too much.

What did you think of Zoey’s revelation, and are you #TeamZaaron or #TeamZuca? Drop your thoughts in the comments.