Confession, the saying goes, is good for the soul. But when faced with the prospect of making one in Thursday’s Grey’s Anatomy, both Owen and Jo pressed “pause” — and understandably so. If he came clean about the steps he’d taken to help dying soldiers end their lives on their own terms, it might keep Cormac in Seattle but land Hunt himself in a whole mess of trouble. And if Jo disclosed that she wasn’t merely in lust with Link, she could jeopardize their longstanding friendship. Did either of them muster up the courage to speak their truth? And how did poor Levi fare when both he and Richard’s Webber Method were, in essence, tried before the Morbidity and Mortality Conference. Read on and find out…

‘I’M GOING TO KEEP TELLING HIM THE TRUTH’ | As “Living in a House Divided” began, we were headed toward the Morbidity and Mortality Conference to evaluate what went wrong during the surgery that killed Devon the Podcaster. (Levi didn’t wait for an attending — case closed?) At the hospital, Maggie shared with Winston that she’d yet to get to speak to her father about the incident. Bailey, what with having to run the M&M, assigned Mer a surgery. Levi was expected to present but arrived looking like he was likelier to be checked into the hospital than anything else. Still, he managed to get the job done, at which point Bailey encouraged — insisted upon — questions. Taryn piped up to say that at the point at which Levi asked for the stapler, everything looked good. But, as Bailey was quick to note, that wasn’t a question. Ultimately, Schmitt broke down. “I killed him,” he cried before running out of the room. At that point, Richard was tasked with taking Levi’s place. 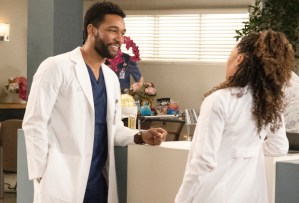 In other words, he was seated squarely on the hot seat. Maggie and Dr. Lin hit him especially hard — so hard that Catherine chimed in to tell Michelle, “This is a teaching tool, my dear,” not some risky cure for cancer. In Richard’s corner, Winston asked if this was an M&M on what had happened to the patient or an M&M on the Webber Method. Uncomfortable as hell, but Devon would surely agree, needed. Afterwards, Catherine put the decision as to whether to continue with the Webber Method in Bailey’s hands. Once more, Miranda threw a surgery onto Mer’s packed schedule. Grey did her one better, saying that she knew someone who could pitch in, too. (Hey, Nick!) In a moment alone, Maggie and Winston found themselves on very opposite sides when it came to the virtues and dangers of the Webber Method. 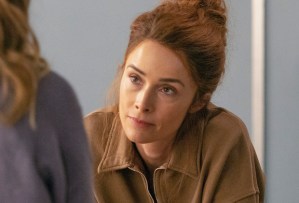 ‘FOR ALL I KNOW, HE’S GOT A SECRET WIFE IN ANOTHER COUNTRY’ | In other developments, Teddy beseeched Owen to tell her what went down in that SUV between him and Cormac and was upset to find that he wouldn’t spill even a drop of tea. Catching McWidow in the halls, Mer called him on his plan to leave suddenly without saying goodbye. “’Cause if I said goodbye to you, Mer, I might not ever leave,” he admitted. “You made me believe that there might actually be life after Abigail.” With that, he was off… or so it seemed. In the parking lot, Teddy pleaded with Cormac to tell her what her husband wouldn’t. But, since Owen had essentially saved Hayes’ life, he kept his lips zipped. “Goodbye, Altman.” Next, Teddy questioned Megan, who easily imagined Owen doing something heroic and stupid. Whatever he’s doing, said Hunt’s sister, “he must believe that it’s his only option.” 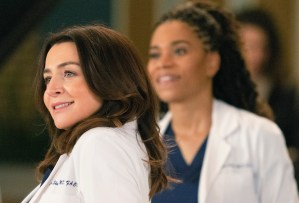 ‘I’VE BEEN ON A DIET SINCE 1992’ | Off Link and Jo’s night of passion, he was delighted. “You were right,” he told her. “This is fun.” But of course, it was more than that for her. At Grey Sloan, Link treated a teacher named Lila… badly. He prescribed her a cortisone shot and advised her to lose weight. Only when she walked away did he notice that Zander had been right and she needed an MRI. Snap outta that sex fog, Link! Perez even called his attending on the carpet in the O.R., justifiably so, for making a snap judgment about Lila and her weight. 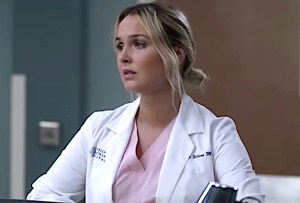 Meanwhile, Amelia treated Francesca, who was back in the hospital with back pain… and quickly called a GYN consult: Carina and Jo, who was immediately awkward around Link’s babymama. In no time, Carina deduced that maybe it was endometriosis. OK by the patient. She had things to do — in other words, her boyfriend. Sensing that Link was confiding in Jo about their split, Amelia asked her to be normal for the sake of their patients. Off that conversation, Carina realized that Jo was having sex with a friend about whom she felt more than friendship. If you love him, you have to tell him, Carina advised. That, or stop having sex with him. “Is there an option No. 3?” asked Jo’s expression. 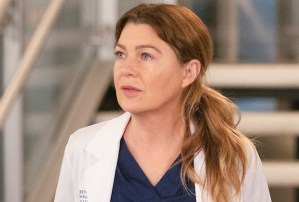 ’HOW DID I GET DRAGGED INTO THIS?’ | When Maggie approached Richard after having “publicly humiliated” him, she tried to suggest that she knew what it was like for a surgeon to lose a patient over a mistake. Richard assumed that she did: “Remember what happened to my niece… Sadie?” Maggie argued that the Webber Method hadn’t been properly vetted, sending her father into a righteous rage. Afterwards, Maggie unloaded on Mer, admitting that Richard felt like they’d all abandoned him. Later, Maggie and Mer joined in Webber’s private conversation — private AA meeting? — with Amelia. They wanted him to feel their presence and explain themselves. The surgeon holding the scalpel is ultimately at fault, Maggie agreed. But there were other factors, and they deserved to be scrutinized from every single angle. “These students are unlike any I’ve ever taught,” Richard said. He’d wanted to give them something to be excited about. “They just need you,” then, said Mer. 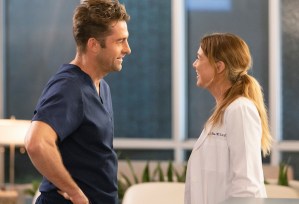 ‘TELL ME WHAT YOU JUST TOOK OUT OF MY HUSBAND’S CAR’ | As the hour rounded the corner and headed for the finish line, Amelia and Maggie noticed Mer talking to Nick. Needless to say, they were keenly interested. “I have a thing,” said Mer, “to go do.” Before skedaddling, Amelia admitted to Maggie that “I have a thing,” too. At Jo’s, she… struggled. “Link,” she finally said, “we shouldn’t have sex.” Though he gave her “the look” and asked if she was sure, she was. (As if.)

Approaching Richard, Bailey said that she had let him down when he introduced the Webber Method. “I should’ve said more” about concerns that she had. What’s more, she wanted to suspend the Webber Method permanently. He was OK with that. Bailey had, in fact, said something, he reminded her. “And I had my wife overrule you.” Finally, Nico showed up at Levi’s mom’s house, begging him to come back to work, lest he lose his residency spot. In response, Schmitt dumped him. As Nick was due to head back to Minnesota, he and Mer expressed how little they enjoyed having to be parted. Catching Noah’s wife in Owen’s room, Teddy refused to drop her investigation; she went after the widow and busted her retrieving the life-ending drugs from Hunt’s car.

So, what did you think of the episode? Jo’s decision to keep mum? “Schmico’s” breakup? Hit the comments with your reviews, questions, quibbles.