Penned by series star Lecy Goranson, the dramatic episode saw Louise’s homecoming cut short by word that someone had been shot at Lanford Woods Mall, where Emilio had just taken Beverly Rose. Locked inside, a helpless Becky stood in frozen panic while the rest of the family was glued to the news.

Emilio eventually called and let Becky know that he and their daughter were safe and sound. Moments later, the family witnessed the shooter, identified as Harris’ former classmate James McNulty, get gunned down on live TV. The lingering trauma beget a larger conversation about gun violence, as well as Dan’s insistence that he hold onto a firearm in case he ever needs it for protection.

Below, Goranson and executive producers Bruce Helford and Dave Caplan break down the intense episode…

TVLINE | Lecy, you have a previous “Story by” credit for Season 2’s “Throwing a Christian to a Bear,” but this is the first episode you’ve written. Tell me how the opportunity arose.
GORANSON | Well, the opportunity was self-created. [Laughs] Though, you know, we had to have some guys sign off on it. I actually put it in my contract [this season]. Being a Chicagoan, my ear is always to… I don’t know, the John Hancock Center or something. Just as the Bears [episode] came out of me saying, “Hey, wait a second! Is this the Chicago area or what? If we’re in this area, we need to talk about sports,” the gun violence is so pervasive in Chicago that it’s what everyone talks about. It’s everywhere — it’s in the suburbs, it’s downtown, it’s in the bad neighborhoods, the good neighborhoods, it’s everywhere you go — and I felt like we couldn’t talk about Lanford without talking about this topic, unfortunately.

TVLINE | I understand this episode was inspired by a conversation you had with a teacher you met in Chicago?
GORANSON | I was sitting with my dad watching the Northwestern production of Joseph and the Amazing Technicolor Dreamcoat. There was a woman next to me with her daughter, and she said, “I know who you are, I watch the show. I teach in Elgin,” which Lanford is loosely based on,” and if you want to write something, write about gun violence because that’s what’s going on.” That was two years ago, before COVID, and look what has happened the past two years. More guns have been purchased and sold in America than ever before. Gun violence is up, gun-related suicides are up, gun accidents are up…. The first day I was in the writers’ room, I was getting texts from my friends in Evanston because there were guns found in an Evanston high school. I don’t know how more on the nose you can get than that, but that’s the truth. That’s what’s going on in our country.

TVLINE | Did you approach the outline for this episode any differently? For instance, did you start by making sure that you were hitting all the dramatic beats first, before going back and seeing where jokes felt appropriate?
CAPLAN | That’s always our approach on The Conners, which is “What is it that we want to say that’s honest and can be filtered through the Conners’ working-class lives?” We try to get that on a story level first, and then we make the leap of faith that we’ll make it funny somehow. 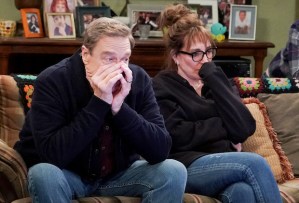 HELFORD | The manta is, “We make the real funny. We don’t try to make the funny real.”
GORANSON | This one was tricky, though, because it’s a topic that no one wants to talk about. And that’s something that’s really been driven home since this process started for me. When I bring it up with friends and talk about the process, it’s remarkable to hear how much people have to say, and how much people have experienced. It’s just exemplary of how pervasive it really is. The interesting thing is this notion that there’s this “liberal Hollywood” versus people who love guns. But when you look at Hollywood, there are guns everywhere — and it’s not like they’re used [in media] and then whatever happens is reflected upon [in the story]. It’s usually just “Bang! Bang! Bang!”

TVLINE | It’s revealed that the shooter is Harris’ former classmate, a kid by the name of James McNulty. Why did you decide to identify the shooter?
HELFORD | Mostly to examine what the reaction was…. It’s easy to dismiss when it’s just some random person nobody knows. When this happens, there are a lot of people who have a history with the shooter, a person who has parents and loved ones regardless of what heinous thing they might have done.
CAPLAN | It’s also our way of saying you might not have been touched personally by gun violence yet, but it’s so pervasive and so ubiquitous in every community, and it’s coming for you eventually because we’re really not doing too much about it. On this particular week, it came for the Conners’ neighborhood, but yours is next, or mine is next, and we want everyone to feel like it’s not a problem you can say is an “over there problem.” It’s an “all over, everywhere problem.” 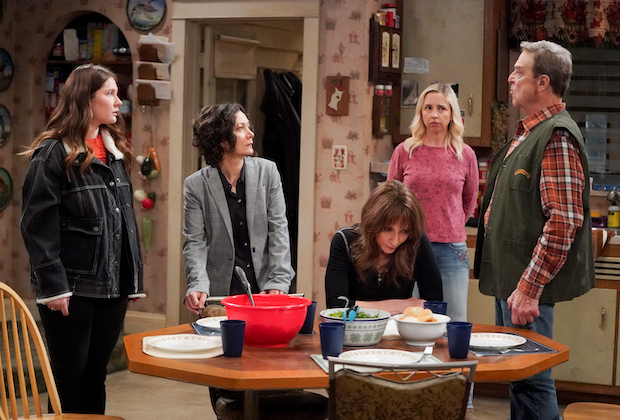 TVLINE | Harris points out that the McNulty kid “had issues, but we all do,” and he was not the first of her classmates she would have expected to go off and do something like this. Why was it important to make that distinction?
GORANSON | I think there’s a myth that everyone who shoots a gun has to have a mental illness. That’s a problem, too, of course. I think the point here is, ‘What is different about this person with a gun?” There are a lot of people who have twists and turns in their lives, for whatever reason. I’m not saying that’s the case with James McNulty, but a lot of people are just having a bad day, get in a fight and shoot someone. People who are irritated, people who lose their jobs… All this life stuff that’s really been accentuated and exaggerated by COVID is real. You can’t just attribute everything to mental illness.

TVLINE | I found myself saddened by Mary’s initial response to the shooting. Here is this young woman who you expect to show fear. Instead, she initially shows preparedness, having gone through countless active shooter drills at school…
GORANSON | We show someone who is so conditioned to go through these drills that are very commonplace — an onus that is put on the majority of our kids, which is really unfortunate and sad. But what happens when the gun violence actually occurs, then what? How prepared are these children for that? What about the trauma? What about the fear and the feeling of safety just going to school, or going anywhere? 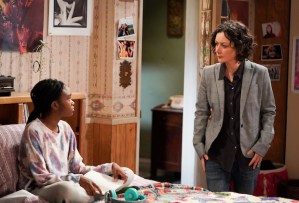 CAPLAN | That’s one of the important takeaways from the show. In the Conners’ working class community, there are not enough resources to deal with the trauma of gun violence, so for Mary it takes weeks for her to get in and see a school psychologist, because there’s only one school psychologist for every 1,500 kids in that school district, which is typical of a lot of these school districts. And then when Becky needs to go talk to someone, she has to wait three hours on a sidewalk to go see a counselor. And Dan would probably love to sit around and process his thoughts, but he’s got to get up and go to work. So what about the resources in these underserved communities? Where are they when the headlines fade from the violence and people are dealing with this [trauma] for days and months and years? Where is the help for them?
GORANSON | There’s something ironic about these kids having this preparedness to save their lives, yet there are no tools to recover from that violence.

TVLINE | Becky is dealing with some pretty severe trauma — and as she acknowledges here, she can no longer drink to cope with her problems. Was there ever a discussion about exploring Becky’s urge to drink more in this episode? 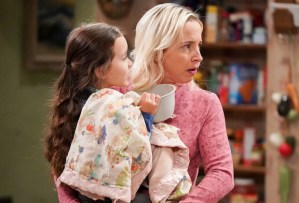 GORANSON | We talked about it potentially being a bigger moment, yeah. I mean, the episode is called “Triggered,” and if something is going to trigger relapse, thinking your daughter could be shot is a good candidate for that. In my outline, initially I did have her calling her sponsor because she didn’t have any other resources… but I think it’s really wise of her to acknowledge that that is how she would usually deal with the situation.
HELFORD | We felt it was important to acknowledge [her sobriety], because the American saying “I need a good, stiff drink” is still pretty prevalent — people just grab a beer or whatever in a traumatic situation — and so we thought, well, this is something that Becky would have done and we wanted her to acknowledge that. We try to be as honest as possible, and it would have been a moment where she had a thought about it — not a moment of weakness, but for sure a moment of thought.

TVLINE | The first episode of the Roseanne revival established that Dan had a gun in the house, but it hadn’t come up again until now. Did that always seem like the most logical way into the debate surrounding gun ownership? 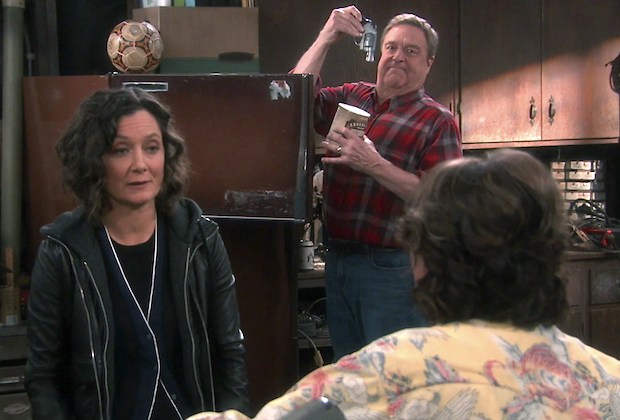 HELFORD | Even further back than that, in the fifth season of Roseanne, we established that Dan wanted Rosie to have a gun in The Lunch Box. Steve Jones of The Sex Pistols [played a customer who] threatened her, and Dan wanted her to have a gun… He felt it was necessary for protection, so that always felt like that was going to be a natural part of this story. We wanted to make a comment about gun ownership and have a balance on both sides of the argument that was going on [among the family].

TVLINE | At one point I had planned to ask if you considered saving Louise’s homecoming for another episode, but the more I thought about it, it made perfect sense that these two events would coincide. You can’t anticipate when something like this is going to happen…
HELFORD | It’s hard. You know, we didn’t expect Katey [Sagal] to get hit by a car, and we didn’t know when she’d be coming back. We had to continue writing the episodes [in her absence], not knowing when she’d be rejoining us, and it just so happened to fall where she was feeling comfortable enough to be on the show and be mobile, so it tied in with this [one]. We definitely wanted that element of “These things don’t happen with ominous winds ahead of them.” It usually just comes out of the blue, and that’s how we wanted it to feel when it did strike.

What did you think of The Conners Season 4, Episode 14: “Triggered”? Grade it via the following poll, then drop a comment with your full review.