Warning: The following contains major spoilers from Wednesday’s Legends of Tomorrow finale. Proceed at your own risk!

Legends of Tomorrow is once again saying goodbye to a team member: Nick Zano, who plays Nate Heywood (aka Steel), will not return as a series regular for a potential Season 8, TVLine has learned. (The show has yet to be renewed.)

Zano joined the CW drama in the Season 2 premiere, going on to appear in 94 episodes. In Wednesday’s Season 7 finale, his character ran through a World War I combat field to save his friend Gwyn’s love Alun. While Nate was successful, the mustard gas eroded his steel exterior, leaving him without his superpower. He then said a sweet goodbye to the Legends before returning to the totem to live his life with his girlfriend Zari 1.0. (For scoop on the finale’s other surprises, click here.)

“It felt like it was time. It was sort of a natural time to say goodbye to this character,” co-showrunner Keto Shimizu tells TVLine. “We feel so lucky to have had this wonderful span of six years of developing this character and working with such a talented man.”

As for the decision to strip Nate of his super ability in his final episode, “it felt like a natural way to end his run on the show,” Shimizu says. “He began the show by gaining the superpower. It felt right that he say goodbye to it as he’s saying goodbye to the team.” 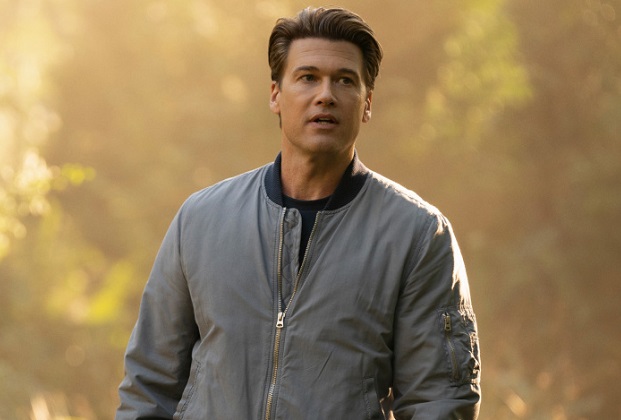 “As we explore in this finale, he still doesn’t feel done. He feels like he has this ability, and he has this drive to be out there and saving people,” Shimizu continues, “and it really made sense, to us, that he would probably never feel like his job was done as long as he still had that ability because he would always feel like, ‘Am I wasting this power by being here and not going out there and actively using it?’ We wanted him to literally go out there and give it 100 percent. And in this case, he does that and more, because by going out there into the mustard gas and saving Alun, he becomes a regular mortal man again. But now he knows that he did everything in his power to do this act of heroism.”

In coming out the other side, Nate has also “broken the curse of his forefathers, which was to die on the field, on the moon, by demon, all these ways that Heywood men have died in the past,” Shimizu notes. Now he can “finally say like, ‘Wow, I’m still alive. Guess what? I’m going to go live,’ and for him that means being with Zari and living a really good life.”

And as with other Legends exits over the years, “of course the door’s always open for people to come back and visit,” Shimizu adds. “But yes, this is a real goodbye. He’s heading off to life with Zari in the totem and to finally writing his book.”

Zano shared the following message on Instagram on Thursday:

“It’s with a grateful, appreciative , full heart I say goodbye to my Legends family… It’s been the absolute most insane, fulfilling experiences I’ve ever had BUT the time has come for Nate/Steel to say goodbye to the greatest, most loyal, most ride or die, fan base…

I want to thank the great @gregberlanti for presenting me w this extraordinary opportunity 6 seasons ago. @marcguggenheim for early support, everyone @dccomics , #MarkPedowitz and my main man and in Burbank #PhilKlemmer for being my daily partner in all this (thank you for the Cena arms)…

To all my show siblings… the ever evolving list of talented people, I have our bonds locked in forever, thank you, love you. Lastly… to my main source of life, my crew… I love you, I love you, I love you. Our village is strong, my admiration and respect for all of your work ethics above & below are high.
I’m going to miss us…
❤️ Nick

Legends fans, what did you think of Nate’s farewell? Hit the comments!