If you’re still trying to process this week’s episode of Chicago P.D. after that shocking ending, you’re not alone.

Tensions were high as Burgess and Ruzek headed to court to fight for custody of Makayla.

The NBC drama previously hinted at a custody battle in the Jan. 5 episode, “Home Safe,” which found the pair rushing to Makayla’s school for footage of the man she said had been talking to her by the fence on several occasions. It turned out that the mystery man was Makayla’s paternal uncle Theo Morrison, who’d filed a court petition for full custody.

Picking up where we left off with that, Wednesday’s episode, titled “Blood Relation,” found the Intelligence cop discussing the case with their lawyer. Despite Theo’s conversations with Makayla at school and his prison record, he was wealthy, an upstanding citizen and a blood relation, which meant he had a strong case.

In court, Theo testified about spending six months behind bars and then getting his life together since then. Insisting that Makayla should be with “real family,” he also implied that Burgess wasn’t the best choice for his niece because of her race.

At home, Makayla asked to have her hair done with braids and beads, which Burgess struggled with since she had no experience with Black hair. Frustrated, she called Atwater — who raised his younger siblings and knows a thing or two about this — for help. Luckily for her, Atwater’s aunt was there to do Makayla’s hair properly. 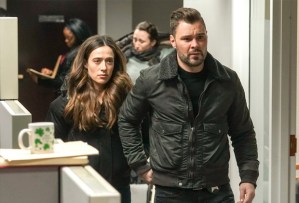 In conversation with Atwater, Burgess revealed her concerns about being a white woman raising a Black daughter in Chicago, and whether this was the right situation for her daughter. Atwater assured his friend that she is good for Makayla, and Burgess agreed, but the hard part was proving that in court.

Things grew more stressful when the judge allowed Theo’s lawyers to access Burgess’ medical records and personnel files. While discussing the case with Ruzek, she realized that her near-death experience may be used against her. Feeling defeated, she said they were going to lose Makayla, and all Ruzek could do was kiss her forehead.

Back in court, Burgess took the stand to hit back at the various strikes against her. Sure, Makayla saw her with a gun in her hand, and she nearly died on the job and refused to take a desk job despite the recommendation. But she knew Makayla’s favorite snack and made great memories like their beach walks on Sunday mornings.

In an emotional plea, Burgess continued to lay out reasons for why she’s good for Makayla: Yes, she’s a mess, and she makes mistakes. However, she helps people and is proud that her daughter gets to see that. What she and Makayla have is real, and that’s something you can’t force. “She’s my family, and I’m hers,” she said.

A phone call revealed the court’s decision: Burgess won custody of Makayla because the child’s bond with the adult trumps everything. But what should have been a happy ending became a nightmare when she and Ruzek found Makayla’s babysitter Gabby bleeding on the floor and Makayla nowhere to be found.

How do you feel about tonight’s episode of Chicago P.D.? Did you see that ending coming? Let us know your thoughts in the comments.