Marquis’ diabolical Joker antics reached new levels in Batwoman’s Season 3 finale, forcing the Bat Team to figure out how to take him down, once and for all.

An opening montage, interposed with flashbacks of a young Marquis getting zapped by the Joker, show Marquis raiding the Bat Cave as part of his grand plan for Gotham: dropping acid bombs on the city from the Bat Blimp flying overhead.

Meanwhile, Alice — who’d been hallucinating men she’d killed — reached her breaking point and was electrocuting herself with the socket wrench she rigged when Mary found her in her cell. Realizing that Alice may not survive her next breakdown, Mary made an emotional plea to the Bat Team to give her the Joker Buzzer. When they pushed back against her request, Mary pointed out their promise to listen to her, also noting that while this wasn’t easy for her, Alice deserved a second chance.

Their conversation was interrupted by a city-wide alert from Marquis, who promised to reveal Batwoman’s identity in five hours. As Ryan went to go “run an errand,” Jada dropped by unannounced to offer full access to her team’s advanced tech and help track Marquis before it’s too late.

Ryan, though, wasn’t so much grabbing essentials as she was visiting Alice in prison, inquiring about why the former villainess thought she deserved to have the Joy Buzzer. Alice’s answers weren’t very convincing until she admitted that she didn’t think she deserved the buzzer, and then offered to trade information about Marquis’ agenda. Those details helped Ryan formulate her own plan, which involved Luke hacking the Bat Blimp to land on top of GCPD’s police station and somehow evacuating the entire city. This required help from her mom. 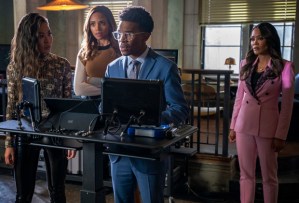 Appealing to her as her daughter, Ryan asked Jada to reinstate her as the CEO of Wayne Enterprises. The move forced Jada to reveal a dark family secret: Marquis’ father Franklin didn’t die in an accidental fall, as was previously reported. Jada’s accusations were enough to get Marquis ousted from the company, and Ryan put back in power with full access to the Bat Cave.

Marquis caught onto Luke changing the blimp’s coordinates and killed his pilots, prompting Ryan to board the aircraft via her grapple gun and confront her brother one-on-one.  Mary, meanwhile, broadcast Sophie’s warning message for Gotham’s civilians to take cover, which was aided by the Penguin’s hypnotic umbrella. People as a result began to clear the streets.

With everyone dispersing, Sophie worried that Marquis would set the bombs off while Ryan was still on board — leading to a brief lovers quarrel in which Ryan was determined to stay and save everyone, and Sophie told Ryan, “I’m not losing you.” Their cute moment, alas, was interrupted by an unimpressed Marquis ready to throw down.

Cue the fight scene aboard the blimp, and Ryan begging the Joker to give her her brother back. It looked like her pleas struck a chord, until Marquis shoved her out of the blimp! Tumbling toward the Earth, Ryan used her grapple gun to take Marquis with her and launched her parachute in time for a rough landing on the roof of the police station. Although she was fine, it looked like Marquis didn’t survive the fall. 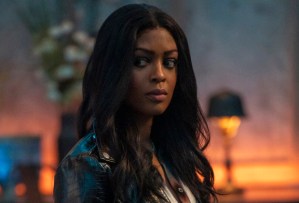 Back on the blimp, Batwing arrived with only a few minutes left before it would explode over the city. But his father’s A.I. was the only thing capable of overriding the controls, and that meant sacrificing the tech for a greater good. This time, though, Luke got to say goodbye to his dad. Bidding farewell to the A.I., he leapt off the blimp just before it blew up.

Appearing out of nowhere on the roof, Marquis instigated another scuffle with Ryan that sent both over the ledge. As Batwoman clung to her brother, refusing to let him go, Alice arrived at the perfect moment to be a hero. A flashback to her earlier jail conversation showed Ryan handing Alice the Joy Buzzer, noting that she really didn’t need it since she was strong enough to survive everything else that happened to her. And you know what? The message got through! Alice gave the buzzer back to Ryan, who then then used it on Marquis. Alice may have done the right thing in helping Ryan, but that still didn’t make them friends.

As the dust settled, Ryan and Jada were relieved to see Marquis awaken and seemingly cured. “Nice to meet you for real,” he told his sister.

Plus, Alice decided to leave the city — ditching her platinum hair for brown in the process — to embark on a journey of self discovery. At the Bat Cave, the team celebrated their big win, and Ryan even began redecorating by replacing the baseball in the glass case with Martha Wayne’s pearl necklace.

In one final twist, dedicated Gotham journalist Dana Dewitt (Allison Riley) was brutally murdered while reporting from the blimp’s toxic crash site. We don’t know who was behind the slaying, but the mysterious figure in tattered clothing seen limping away suggests major trouble ahead for the Bat Team….

What did you think of Batwoman’s Season 3 finale? Grade the episode below and drop your reactions in the comments. Plus, check out our interview with showrunner Caroline Dries, who breaks down the episode’s biggest moments.