The African restaurateur who inadvertently disrespected Calvin while flirting with Sabrina is back on Tyler Perry’s Sistas, and this Wednesday at 9/8c on the BET drama, he’ll be heading to the bank where she works.

Bayo is his name, and he’s not going to stop pursuing the beautiful bank manager anytime soon, boyfriend or not. “This is not the last we’ve seen of him for sure,” Novi Brown, who plays Sabrina, confirms for TVLine. “He’s just figuring out new ways to try and impress her. He met Sabrina at the bank, so he’s returning to ‘the scene of the crime.'”

The bigger questions are: Will Sabrina be beguiled by Bayo’s charms? Will he ask her out on a date again, or just keep popping up? And will Sabrina grow curious enough to allow Bayo to pursue her… or will she stick with Calvin now that they seem to be getting more serious?

One thing is for certain — Maurice will have an opinion or three about the matter. Speaking of which, he is dealing with his own love-life drama now that Que has gotten out of jail early and is trying to beg his way back into Maurice’s life. 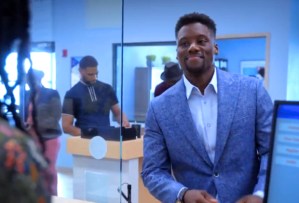 But as Sabrina will point out, even if Maurice wants to give Que the benefit of the doubt, just being around the suspected felon could cost him his job, because Que tried to rob the bank.

“I really love Sabrina and Maurice together. I feel like that relationship is very relatable,” Brown shares. “They represent a bond between a woman and a man that is not sexual at all and what that looks like. They are both looking for love and have vulnerabilities. I love to see platonic male-and-female relationships. They need each other, and they are more than work friends.”

Brown says the experience for her is extra special because she admires and appreciates Brian Jordan Jr., who plays Maurice. 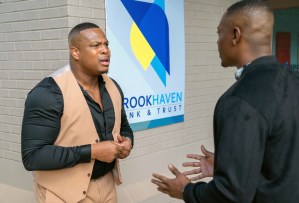 “I love working with Brian,” Brown exclaims. “He’s a theater vet like myself and it’s really, really amazing to see how deep he goes with his role. We both understand the value of Maurice and Sabrina’s conversations and what they bring to Sistas.

“For instance, Maurice has parental issues and they trigger feelings of low self-worth,” she adds. “There are so many relationships that have this kind of complexity in real life. Maurice is so good at hiding his emotions through jokes, but Sabrina always knows when he’s hiding from how he really feels.”

What do you think of Bayo courting Sabrina? Should she date him? And should Maurice give Que a second chance? Drop your thoughts in the comments.