The minute Thad shot and killed an innocent partygoer in the Valley for a perceived slight on FX’s Snowfall, White Rob’s fate was sealed.

Worried that Thad’s impetuous action would bring too much heat on him and his crew, Franklin turned to his childhood friend and business associate to help him get rid of Thad with the promise that he would check White Rob into a drug rehabilitation center when it was all said and done.

Sadly, this was before Thad revealed that White Rob had told him about Reed, the CIA agent and drug connect, who had been supplying Franklin with his cocaine. And suddenly Franklin knew he would have to kill White Rob for talking too much. As fans saw in the Season 5 premiere last week, Franklin had his former bestie look toward the southern skies in search of Halley’s Comet and then shot him in the back of the head Of Mice and Men style.

Actor Taylor Kowalski, who has been costarring as White Rob since Snowfall Season 1, says even though he understands why his character had to die, the departure is heartbreaking.

“I remember in Season 1 when Reed killed Alejandro,” Kowalski recalls to TVLine. “One of the producers turned and looked at me and said, ‘Drug dealing is a scary business and so is show business.’ I knew all of this, but I still had conflicted feelings when I read the script. I was so sad, but also thrilled about the way the writers wrote his death because of how it all played out. There was something poetic about having White Rob die while looking at a comet.” 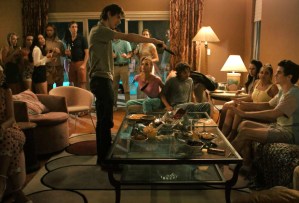 Kowalski adds that he took comfort in the fact that Peaches was horrified by White Rob’s murder at the hands of Franklin as were Leon, Louie and Jerome when they found out.

“I read Episode 2 and I remember all of these characters basically asking, ‘Wow! Why did you do that?'” Kowalski shares. “It also goes to show you that Rob’s death puts a target on their backs. Like if they do something that makes Franklin not trust them, he could shoot and kill them, too. White Rob was such a non-threatening presence. But he also didn’t evolve and his addiction and big mouth cost him his life.”

Damson Idris, who stars as Franklin, agrees that White Rob was his own worst enemy and foreshadows more Season 5 tragedy.

“Franklin couldn’t trust him anymore,” Idris explains. “He thought about what Veronique said about protecting her and their family and he just couldn’t risk Rob flipping on him. Rob was already telling people their business and he didn’t know how far Rob was willing to go. Rob was someone Franklin had known his whole life. But it also sets it up perfectly to show Franklin is in a completely different space right now and nothing can come before his family and his business.” 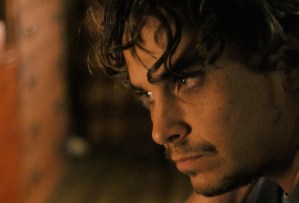 Gail Bean, who costars as Wanda, reveals that White Rob’s struggles with his crack addiction served as a stark reminder for her character.

“When Peaches said, ‘Remember, you used to be that fool,’ it reminded Wanda to sympathize,” Bean observes. “Sometimes we try to bury a certain part of ourselves that’s ugly and try to discredit that. Wanda had to admit not only could that be her but that was her.”

Still Bean contends White Rob had to go even though losing the man who played him has left her crestfallen.

“You don’t play with drug dealers,” Bean states matter-of-factly. “When you get mixed up in the game, feelings are irrelevant and there is no remorse. There is no sympathy. Once I saw Rob was on drugs, I felt sorry for him but he was reckless and talkative. But I’m going to miss Taylor. I absolutely love him. That was my work friend. We’d stand around on set cracking jokes and giggling. When he watched the premiere, he was so sad, he cried and that made me cry.”

But Kowalski is a lot tougher than his alter ego was. For instance, in the scene when Franklin slaps poor White Rob into reality, Kowalski had to suffer through several takes of Idris’ open-hand strikes.

“That was a helluva slap,” Kowalski recalls with a wince and laugh. “It was great because it was captured. It’s not great when you do all of that and it doesn’t make it in, you know? You can’t fake a reaction like that. I thanked Damson afterward for doing a good one so we didn’t have to do it again so I could save face for the crew members who were watching. 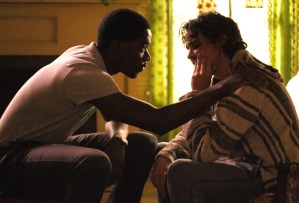 “You ice your face privately, but in front of the crew, toughness is a badge of honor,” he adds. “I felt like it was revenge for Rob slapping his father in Season 2. That scene was director Ben Younger’s idea and I figured I’d go out with a bang. It’s not easy to slap another actor.”

It’s also not easy walking away from a cast and crew you respect and admire, Kowalski concedes.

“They clapped me off when the episode wrapped and that felt really good,” the actor surmises. “I would love to come back as a ghost but that’s not this show. I will keep watching because I love the writing and I love the cast. They’re my friends and I want to see where this whole thing goes.”

Were you heartbroken by White Rob’s fate or did it feel unavoidable? Drop your thoughts in the comments.