The following contains spoilers for the Season 1 finale of Vikings: Valhalla.

Time was running out for the queens of Vikings: Valhalla, as the Netflix drama’s eight-episode freshman run drew to a close. Facing internal and external threats, both Jarl Haakon of Kattegat and Queen Emma of England found their cities under siege and their power threatened. In the end, which queen came out on top in the Season 1 finale?

THE QUEENS OF ENGLAND | Things start off poorly for Queen Emma, who is banished back to Normandy by King Forkbeard at the demand of Queen Ælfgifu. However, despite heeding her demands, Ælfgifu still refuses to reveal the location of Canute’s fleet, leaving Forkbeard at Ælfgifu’s beck and call.

While this gives Ælfgifu powerful leverage in Forkbeard’s court, Godwin convinces her that it is better to be an ally of Forkbeard rather than his enemy. The two come up with a scheme to send Ælfgifu to the rebellious kingdom of Mercia, Ælfgifu’s home, where she will convince them to swear loyalty to Forkbeard and Canute. 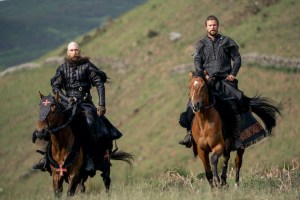 GOOD CHRISTIANS | Having betrayed Freydis and Kattegat, Harald sees the true, massive size of Olaf and Kåre’s army and learns their battle plans. While Kattegat’s sea gate usually makes invasion by water impossible, the impending wolf moon will raise the tide high enough to get Olaf’s fleet over the defenses. Meanwhile, Kåre will lead the land attack against the main gate, splitting Kattegat’s limited forces in two.

Harald, ever the negotiator, convinces Olaf and Kåre to parlay with Haakon to convince her to allow a mass Christian conversion, thus sparing her city from the impending bloodshed. The two begrudgingly agree to this, but Haakon refuses the offer. Harald takes the opportunity to give Leif a secret message warning them about Olaf and Kåre’s strategy, thus giving Kattegat a fighting chance and saving his relationship with Freydis

THE INVASION OF KATTEGAT | Olaf and Kåre’s invasion begins just as Harald said it would, with the former coming by sea while the latter attacks the main gate. However, Kåre, untrustworthy of Harald, keeps him sidelined, promising to bring back “Freydis’ head as a memento.” With their army split, the Kattegat force at the wall is quickly overwhelmed, and Haakon is gravely injured. Freydis and her fellow shield maidens evacuate her to the Great Hall and are followed by Kåre.

Meanwhile, the sea attack turns out to be a ruse, as Olaf sent his boats without any army to operate them. Olaf frees Harald from Kåre guards, revealing that he knew his half-brother would warn Leif and Freydis about his plan and that he used Kåre as a pawn to weaken Kattegat so he can swoop in and take the city easily at the end of the battle.

Harald rushes to the battle and enters the fight on the side of Kattegat but is injured by one of Kåre’s berserkers. At the Great Hall, Haakon, seemingly dying, reminds Freydis that, as the Last Daughter of Uppsala, she must survive. Kåre then arrives at the Hall and does battle with Freydis. To the jarl’s surprise, Freydis holds her own, though he eventually disarms her, seemingly sealing her fate. However, Freydis uses her hidden knife to mortally wound Kåre before reclaiming her sword and beheading him.

FALL OF A GREELANDER | Olaf finally arrives in Kattegat to claim the spoils of war, mortally wounding Liv in the process. Dying in Leif’s arms, Liv asks if he will join her in Valhalla one day, forcing him to choose between the old gods of his past and the Christian god he has been flirting with. Liv dies before he can give her an answer, and in his sorrow he declares that he does plan on joining her at Odin’s table.

Despite the death of Kåre, Kattegat falls to Olaf’s army, which takes the Great Hall and declares Olaf the king of Norway. Freydis eventually finds Harald, and the two escape the city together. 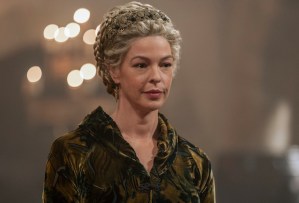 THE MORE THINGS CHANGE, THE MORE THEY STAY THE SAME | Ælfgifu is able to secure an alliance with Mercia and returns to England to give Forkbeard the good news. There, she is greeted by Emma, who reveals that she, Forkbeard and Godwin faked her banishment and sent the Danish queen to Mercia to distract her while they located Canute’s fleet. Forkbeard takes the boats and army to Kattegat to exact revenge on Olaf for his betrayal, forcing the new king of Kattegat to cut his reign short and abandon the city.

Leif, though, remains in the city to mourn Liv but is interrupted by some rapists sexually assaulting innocent women. Angry at the world, Leif brutally murders the men, unleashing an inner darkness that, until now, had been kept at bay.

Now it’s your turn. Grade Vikings: Valhalla’s Season 1 on the whole, then hit the comments with your thoughts!