Killing Eve returned for its final mission this week — and Villanelle is truly in uncharted territory.

Sunday’s premiere kicked off in Russia, with a badass operative on a motorcycle storming into Konstantin’s office, where he’s some kind of elected official now. The biker beats up a bodyguard and then pulls a gun on Konstantin. She takes off her helmet: It’s Eve! She shoots Konstantin in the hand (“That was for Kenny”) and then demands to know where Helene is. He doesn’t know, but gives her the name of her last known contact, who’s now dead. He also wonders why Eve doesn’t ask Villanelle… but Eve doesn’t answer. Konstantin ominously predicts that Eve won’t survive this mission. “Thank God,” she replies. 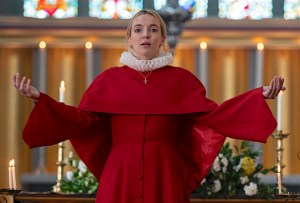 Villanelle, meanwhile, is singing angelically (!) in church (!!) and helping clean up after services. A new friend named May marvels: “I don’t know how you can be so good all the time.” Villanelle tells her, “I don’t have any other choice.” Plus, we see that Eve has an elaborate conspiracy board set up with Konstantin, Helene, Dasha and more on it — and she’s also having sex with a dude name Yusuf who she’s doing surveillance work with. She gets an invite to Villanelle’s baptism… and promptly tears it up. Oh, and Carolyn’s been fired from MI6, and that jerk Hugo is now a big shot on the agency’s Russia desk. Is there no justice in this world?

Villanelle has seemingly adopted a godly lifestyle, going by “Nelle” now and living with a minister and his daughter May. (“I’ve always wanted a family,” she tells them.) But she can’t leave her killer ways behind: She picks up the family cat, and when it hisses at her, she throws it against the wall, killing it. She retreats to May’s bedroom, where she asks the girl to stroke her hair and tell her why she likes her so much. The next day, the minister leads Villanelle through her baptism rehearsal, and she’s saving a seat for “her guest.” He starts to doubt her faith, though, when he sees video of her burying their dead cat. When he asks her if she believes in God, she says she thinks it’s good for her to be around people who believe in God. She knows that people think she’s evil, she adds — and she wants to prove them wrong. 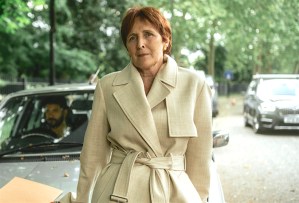 While Eve is out for a run, she’s greeted by Carolyn, who informs her that members of The Twelve are being systematically murdered. She wants Eve to take over the investigation, but Eve insists she doesn’t want to play chess anymore. She takes the file, though, and heads to a funeral home to check on the dead body of Helene’s last known contact. She presses the embalmer for more information, and the worker shrugs her off — but something about the worker makes Eve’s Spidey senses tingle. And at Villanelle’s baptism, she looks crestfallen when she sees the seat she reserved for Eve is empty and rushes the minister through the ceremony. “Dunk me!” she demands, before plunging her own head into the baptismal water. Does that still count? 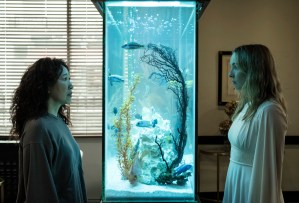 Eve heads down to her hotel lobby and gazes at the fish tank there — and suddenly, she sees Villanelle on the other side, still in her baptismal gown. Villanelle forgives her for not coming, and when Eve tries to walk away, Villanelle frantically tries to show her she’s changed, dropping to her knees and praying for Eve. “If you really changed, you wouldn’t have come here,” Eve snaps. (“If you really changed, you wouldn’t have let me,” Villanelle replies.) The two stand toe to toe… and Eve slaps Villanelle across the face, firmly telling her, “Different person,” before walking away for good.

Eve tracks down that funeral worker and stalks her until the worker turns around and beats Eve up — but Eve does spot her getting into a fancy car with Helene. Carolyn spits at a government building and then heads to Moscow to slip classified intel to the enemy. And Villanelle is back in church chastising Jesus (“It’s very much in your interest for me to believe in you”) when she’s joined by May. The girl comforts Villanelle with words, and then a kiss. But Villanelle declares, “You don’t need me” and plunges the poor girl’s head into the baptismal water, almost drowning her before snapping out of it and giving the girl CPR to bring her back. Well, she didn’t kill her. That’s progress, we guess?

That night, Villanelle gets the sign she was looking for: a visit from Jesus Christ himself (also played by Jodie Comer), who says he’s here to “lead [her] to salvation.” Man, the road to salvation is a weird one.

Alright, now it’s your turn: Give the Killing Eve premiere a grade in our poll, and then hit the comments to share your thoughts.