Robyn and her crew tackled a different type of social justice when CBS’ The Equalizer aired this week.

A woman, whose grandmother had survived the 1921 Tulsa Massacre, wanted to retrieve a valuable painting of her great-grandmother that racist thieves had stolen, but wasn’t finding any luck or justice. A descendant of the terroristic larcenists named Nardoni refused to give back the portrait and police interventions proved fruitless. Time was also working against them because the woman’s grandmother was more than a century old and on her deathbed.

Making matters worse, Nardoni was a generous contributor to a police fund and Robyn quickly understood why the law would turn a blind eye. With a little digging and reconnaissance, Robyn learned Nardoni had locked away the painting in a high-security storage space called the Vault. The place was so impenetrable, however, not even Harry and Mel could figure out a way in.

This is when Robyn realized she’d have to turn to a former colleague named Jessie “The Worm” Cook, played by guest star Jada Pinkett Smith. In order to find Jessie — an infamous and brilliant cat burglar with a photographic memory whom Robyn had worked with as a CIA agent — she tracked “The Worm” to her latest con, where the thief had poisoned a rich man to distract his bodyguards while she broke into his safe to steal a 22-carat diamond. 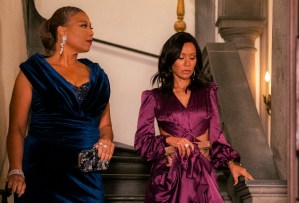 Robyn attended the event and when Jessie cracked the safe, Robyn snatched the diamond and held onto it until she knew she had Jessie’s full attention. She told the thief about the painting and the assignment, and promised Jessie she could steal anything else she wanted inside the Vault if she helped retrieve the art work.

Jessie agreed, Robyn gave her back the diamond, and then she took Jessie to Harry’s underground cyber lair a day or so later so Jessie could study the blueprints of the Vault and figure out a way in. Once Robyn removed Jessie’s blindfold, the pilferer wasted no time flirting with Mel and Harry and bickering with Robyn. When cooler heads prevailed, Jessie said she would help get back the painting and even divulged some intel she’d collected by hooking up with the architect of the Vault.

As Robyn had feared, Jessie made the mission anything but easy by incessantly improvising and not following Robyn’s plan. She didn’t get a keycard as she’d promised, and knocked a guard unconscious to use his keycard instead. This same guard woke up midway through the retrieval, of course, and tripped the alarm, which meant a disappointed Robyn had to leave the painting behind. 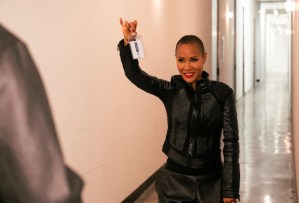 Angry and frustrated — especially because Jessie had made the time to steal a pair of Marie Antoinette’s diamond earrings instead of focusing on the task at hand — Robyn barked at Jessie and threw her out of her van after they narrowly escaped. (At least there weren’t any guns drawn and no one got slapped, a la Set It Off.)

Now it was Robyn’s turn to improvise. Mel and Robyn hijacked Nardoni’s delivery truck as his henchmen attempted to relocate his paintings, but the bad guys gained the upper hand and suddenly the guns were turned on Robyn and Mel.

They took the two women back to Nardoni’s house where he mocked and threatened them, and told his men to dispose of them, but a clever Jessie had other plans. She knocked the lead baddie unconscious (which must be her jam) and then Robyn and Mel made quick work of the others. They tied up Nardoni, set fire to his house and grabbed the painting. Jessie even lifted a Basquiat the larcenist had for good measure. The cops later arrested Nardoni for money laundering.

Robyn returned the family’s portrait to her client and after 100 years, her grandmother finally got to gaze upon her mother’s beautiful face again. Jessie, meanwhile, seemed to really enjoy working with Robyn more than she had in the past and pondered a possible future where they could join forces again. Bishop who, amirite?

What did you think of Sunday’s Equalizer and Robyn and Jessie’s (aka Cleo and Stony’s) reunion? Would you like to see Jessie on the show again? Drop your thoughts in the comments.