The critically acclaimed dramedy Better Things is about to kickstart its last hurrah, so naturally, its multi-hyphenate star Pamela Adlon had a mixture of feelings while preparing for the impending goodbye.

“When I first started thinking about it being the last season, I got a stomachache,” Adlon, who portrays Sam Fox, in addition to serving as creator, director and writer, tells TVLine. “I got a pit in my stomach. When I was talking to my network about it, we both mutually felt like this would be a great place to stop. By the end of the phone call I went from having a stomachache to being very excited.”

Season 5 — which premieres its first two episodes Monday, Feb. 28 at 10 pm on FX — will give viewers their final few chances to hang with the Fox family, who will once again face a sea of changes, milestones and traumas by series’ end. But with such limited time left to wade around in the world of Sam, daughters Max (Mikey Madison), Frankie (Hannah Riley) and Duke (Olivia Edward), and mom/grandma Phil (Celia Imrie), Adlon was faced with the nerve-wracking task of figuring out how to bring her fictional family’s story to a satisfying close.

“I was like ‘What did I do? I should’ve wrapped [at the end of] Season 4! This is so hard!'” she says. “The challenges were huge. I can’t even believe I’m on the other side of it now. I have goosebumps looking back at where I was.”

In the upcoming run, Sam and her brother Marion uncover a surprising family secret, Max leans on one of Sam’s closest friends for help and a now-teenaged Duke’s growing pains emerge in full force. Even “the village” — which Adlon lovingly calls her character’s cohort of besties — gets time in the spotlight to take a few farewell bows.

But how was she able to pack so much punch in just 10 short episodes? Akin to her character’s penchant for cuisine, Adlon uses a food analogy to help detail her creative process. 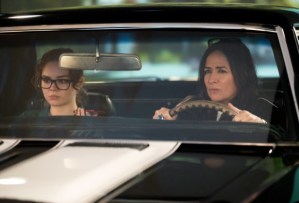 “Being able to tell these stories, it just became about folding, like dough, over and over and saying, ‘There’s too many air bubbles in here. I’ve got to get nutrients,’ then peeling it back and putting it in again,” she says. “It gave me a renewed vigor to put a new energy into the show, and give everybody a special little moment.”

But now, the initial nerves have calmed, and Adlon is eager to release Better Things‘ concluding chapter to the world.

“I have these 10 presents for everybody, all wrapped in a bow,” she says. “I’m out of my mind with excitement. Of course I’m emotional. I’m mostly emotional because I’m filled with gratitude. It’s an extraordinary gift that I’ve been given to hone my skills, skills I didn’t even know that I would have. I didn’t know that anybody would give me the opportunity to create and lead in this way.

“I’m stepping out into the sun and blinking and going, ‘Wow, did this really happen?'”